On his birthday–March 11–Grandpa crowded onto the U.S.S. Huntington to start home. They sailed the next morning. Unlike his trip over, which brought him through England, his group left from the French port city of Brest, on the far western tip of France. He estimated there were 2500 troops packed onto the ship.

He sent Grandma a 61-page booklet, Fighting the Hun on the U.S.S. Huntington. 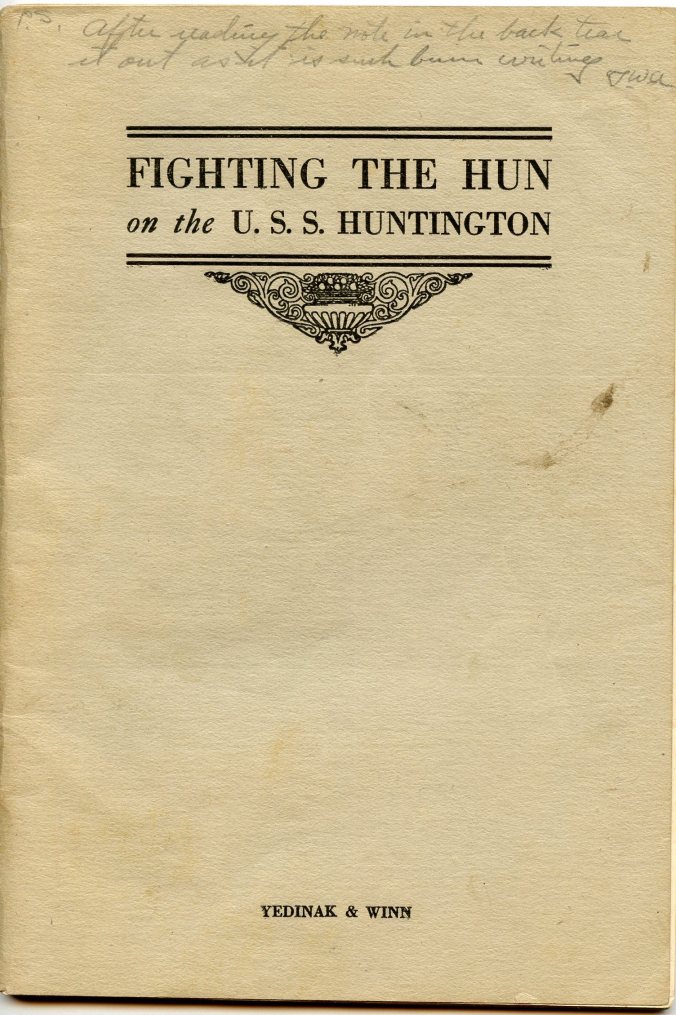 That’s Grandpa’s handwriting at the top. “P.S. After reading the note in the back tear it out as it is such bum writing. T.W.A.” Here’s that page, dated March 14. The torn edges show that someone did tear out this page; who did that and who folded the page are unknown to me.

I am now about one thousand miles out in the ocean, came aboard the ship on my birthday Mar 11, sailed the next morn about eight o’clock. The water was awfully rough that day all day. I got pretty sick “fed the fish a time or two” but it has been good sailing the last two days and I am feeling good only a little dizzy at times. This is the history of the ship we are on. There is about 2500 troops on. We are making good time. Will reach New York a week from tomorrow if nothing happens.

So I close with love

The U.S.S. Huntington, originally known as the U.S.S. West Virginia, had been a warship active during World War 1. 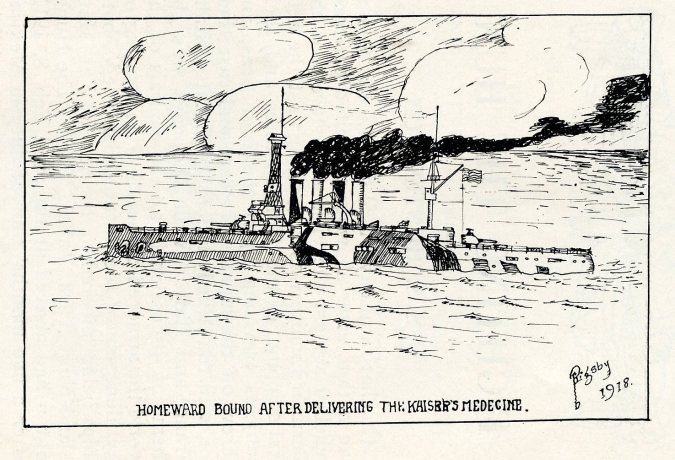 This drawing appeared on page 16. The camouflage was added to mimic the look of waves.

After the armistice, the U.S.S. Huntington was converted into what the booklet called a “troopship.” By converted, it was emptied of everything that could be removed to create the maximum amount of space to bring home large numbers of soldiers. The ship crossed the Atlantic six times during the spring of 1919, carrying more than 12,000 troops. The U.S.S. Huntington was one of 24 battleships and cruisers pressed into service for this purpose, according to the booklet.

This postcard shows the exterior of the ship. From Grandpa’s materials.

Many postcards began as photographs taken on board.

A cartoon published in the booklet, p. 25.

The postcard Grandpa saved, shown at the opening of this post, documents the crowded conditions on board, and the nearly identical regulation clothing worn by the troops. When they landed, this clothing would be laundered and the soldiers themselves cleaned up (including delousing). But notice the helmet–with its distinctive spike–worn by the man in the detail below. It’s a German helmet called a Pickelhaube. Although the U.S. Army forbid taking anything from an enemy captured or killed in battle, such souvenirs made their way home as prized trophies of war. 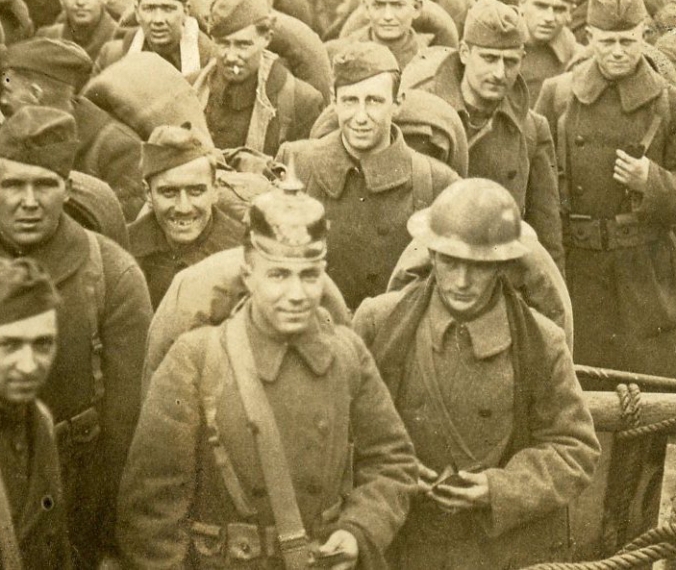 Detail of postcard in Grandpa’s collection.

World War 1-era postcards can be seen online. I searched with the words “USS Huntington March 1919 troop transport” and discovered other views of life on this (and other) transport ships. On one site, I found a postcard titled “Bucking the Big Ones,” which seems to document Grandpa’s description of rough waters. Another one, “The Spray Line March 11, 1919” was taken on Grandpa’s ship. Here’s the link: https://www.ibiblio.org/hyperwar/OnlineLibrary/photos/sh-usn/usnsh-w/acr5-q.htm

If you’re interested in the history of postcards from this era, the Smithsonian has a nice overview:  https://siarchives.si.edu/history/featured-topics/postcard/postcard-history.

For Grandpa, the postcard was a handy way to send off a quick note. This one, written during his lay over at Camp Merritt in New Jersey, captured the simple dream of soldiers deployed overseas. As Grandpa wrote, “This is what we longed to see.”

Postcard Grandpa wrote on March 31, 1919, after landing in New York.

Message on back of March 31 postcard.

Mar 31. We are still at Merritt, leaving tomorrow for Camp Grant, will be about three days going there, feeling fine, hoping to be home soon.

P.S. picture on other side is what we longed to see while in France.

Grandpa saw the Statue of Liberty after spending nine months in Europe, half of that time in battle and the other half in a hospital. A long trip, and not over yet.

Spirits were high, Grandpa reported, as the troops left Camp Funston, May 23. They spent five days on the train, stopping along the way to march in towns and listen to patriotic speeches. Grandpa sent a map to Grandma, on which he marked the places they stopped. You may be able to blow up this map (which was one side of a train schedule) and see the “x’s” he wrote in pencil.

Detail of map. New York, the destination, is on the right. On the left is the border of Illinois, which they crossed on Day 2, Friday May 24. 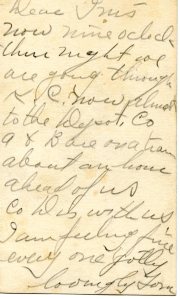 By 9 pm, they were moving through Kansas City. “Every one jolly” he scribbled on this card.

Just leaving Hannibal, crossed the Mississippi into Illinois. “The boys have a little slogan like this (is Company C downhearted)–then all yell (Hell, no!).” They rode in Pullman cars, “lots better than I thought,” Grandpa wrote. About that writing–not easy on a moving train.

Later that day, he sent this postcard.

Another letter from that day included this: “The way we mail our letters is to hand them to someone along the side. We are not allowed to get off.” Also along the side of the train tracks were people who came waving flags, some handing them candy and tobacco. Red Cross volunteers also showed up with coffee and refreshments.

In Springfield, they brought a stray dog on board.

Approaching Detroit. “I am feeling fine also enjoying myself.” And a favor, “When you talk to Mother tell her how to address my mail.”

Later, they crossed Lake Erie on a boat.

Sounds like the troops were a bit punchy by Day 3. They started yelling out the train window at startled passersby. A sergeant put an end to that.

Seems like good advice, to “quit hollering out the window.”

Nearing New York, and it was raining, a lot. But the views were nice. “We had some fine scenery coming through the mountains.”

That dog from Springfield, well, they lost it. “We got another one, a big bull dog. When we go through the towns he gets up and looks out the window.”

“We will get to camp some time tonight, and I hope they have some water there as I and all the rest are getting dirty as can be.”

“We are sixteen miles from New York city.” When they arrived at Camp Mills, Grandpa received some mail. “Mother talks real reconciled in her letter and it makes it a whole lot better on me when she is. Of course she will worry some. I don’t want you to worry but to think I am doing a noble thing as I could have been exempted if I had tried as hard as some of the rest. But wear your star of honor.”

After they settled into camp, their tents and spirits withstanding days of rain and mud, the troops awaited the ship that would transport them abroad. “We might be here 25 days yet,” Grandpa wrote. In fact, they would leave the next week.

But that week in New York held some pleasures. They went into the “big” city. “It would take me a year to tell you what I saw,” he wrote on May 31, including “most of the large buildings.” He’d been there the day before, on May 30, which was what Grandpa knew as Decoration Day, the forerunner of Memorial Day. “The crowds of people on the streets were something awful. I never saw as many children and never will again. They were like bees . . . ” (Readers, any ideas on the word describing those bee-like children?)

Finally, Grandpa wrote about something remarkable, “aeroplanes.” “They are just like birds flying over our head. The factory where they are built is only about a mile from us.”

And through it all, the train trip and the stay in New York, Grandpa found comfort in the company of a dog. “We still have the dog, he sure is a dandy, we are going to try to take him to France.” That plan changed the next day, when the dog ran off. Honestly, it’s hard to imagine an army company smuggling a dog on the ship. Then again, it’s hard for me to imagine any of this, the crazy lead-up to being shipped off to war.