The simple caption, “interior view of dormitory,” leaves the meaning of this image up to the imagination. It appeared in the booklet, Souvenir of Camp Grant, Ill. and presumably shows a dormitory there. But I’ve run across other commemorative booklets of training camps that have similar (often identical) images of life at camp–the dormitory, mess hall, recreation facilities, scenes of physical activities and military drills. Most of these souvenir booklets were published in late 1917 or early 1918.

When I look at this photo, I let my imagination sort out its meaning. It’s April, 1919, I imagine, and that one soldier, sitting on his cot, is my grandfather two days before the end of his military service. On April 6, in the letter posted here, he told Grandma that he had walked around camp with his hometown (King City, Missouri) buddy Oda Fuller, before coming back to the dorm to take a nap.

I see him on the cot, looking directly us–at Grandma, his family, his future, as well as his immediate past. He is surrounded by the trappings of a life forced on him, some 18 months earlier. Like thousands of other men of his generation, he wore a regulation coat, hat and uniform, carried a regulation pack, slept in a cot that was identical to all the others, and stored his boots and other items in one of the simple wooden boxes that were placed at even intervals on scrubbed wooden floors.

In this dormitory, light comes in from a window in the distance and, given the shadows, from windows on the right. The exposed beams and rafters support the weight of this equipment and, in my way of understanding a soldier’s life, represent the enforced structure of service, laid bare here in its simplicity and absolute clarity.

Not shown, but present I imagine, is the burden of memories my grandfather carried. The memories of the miserable conditions at the front, of making a bed in the mud and being grateful to live another day. The memories of jumping over bodies of his dead comrades as he raced forward in battle, or beat a hasty retreat to safety. The enduring memory of being wounded, now sketched into his right arm, a permanent and daily reminder of his service. My grandfather carried good memories, too, of the friends he’d made, the men he’d learn to depend on and who depended on him.

I look at that lone soldier on his cot, thinking he represents my grandfather, and wonder about one more thing. Is he ready to face the new unknown, ready to go home to a place that, like himself, has been changed by the experience of war?

That afternoon of April 6, 1919, after finishing a nap, he wrote Grandma a short note, concluding, “I have run out of anything to write.” One chapter of his life was coming to an end. 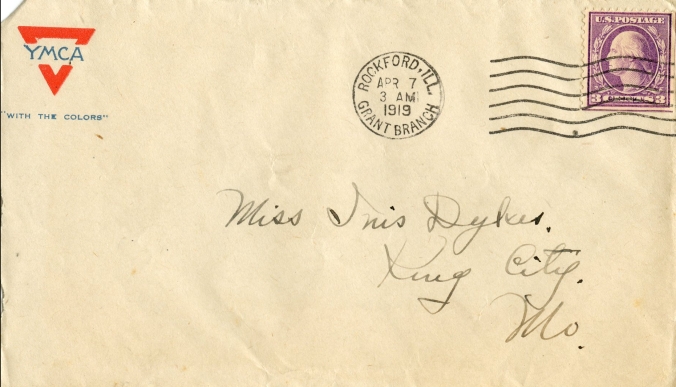 Again a line to let you know I am thinking of you and how I am. This is Sunday eve just think of what next Sunday may be. I am at the Y.M.C.A. came over since supper. It is awfully warm and has been all day. I think it will rain tonight, tried to last night but only sprinkled. Well I got up at four oclock this morn and worked until noon then afternoon I cleaned up and Oda and I walked over to the edge of the camp, came back and laid on my bed the rest of the afternoon. I still don’t know for sure whether I will get to leave here Tuesday or Thursday but you know the one I want it to be. There was lots of visitors here today so many boys here from Chicago and their people come out to see them. I didn’t get any mail today. Here’s hoping I get some tomorrow. We had ice cream and cookies for dinner today. Some of the boys said they was feeding them that trying to induce them to reenlist.

Well my love as I have run out of anything to write I will close, sending lots of Love and Kisses

One thought on “Nothing more to say”