I’ve often wondered, as I research Grandpa’s service in World War 1, what Daddy knew of this time in his own father’s life. Did they share, as some fathers and sons do, the accounts of war, stories of camaraderie among soldiers, duty to country?

If they did, they kept their discussions private. I never heard them.

My age may have contributed to this absence of war stories. Grandpa died in 1967, when I was 15, and too young to have any interest in wars. And in 1981, when Daddy died of heart disease, at the young age of 58, I was a very opinionated 29-year-old woman, a product of the Vietnam War era, with its extreme anti-war and anti-establishment feelings. I realize now, sadly, that Daddy died long before I could open my mind to the personal stories of war, to the very experiences that had shaped the lives of his parents. What had they shared around their dinner table?

The only person who might have shed some light on both Grandpa’s service and Daddy’s own feelings about war would have been Grandma. She outlived both of them. She obviously kept the letters Grandpa wrote. But she never brought up the subject of war to me. When I was in college, I do remember spending time with her, talking about politics, which certainly would have included the Vietnam War. She listened, but never offered up any ideas based on her own experiences.

I have a picture of the three of them taken on December 7, 1941, the day Pearl Harbor was bombed. This event, which led to American involvement in World War II, would present an opportunity to my father and young men his age to engage in the great war of their generation. 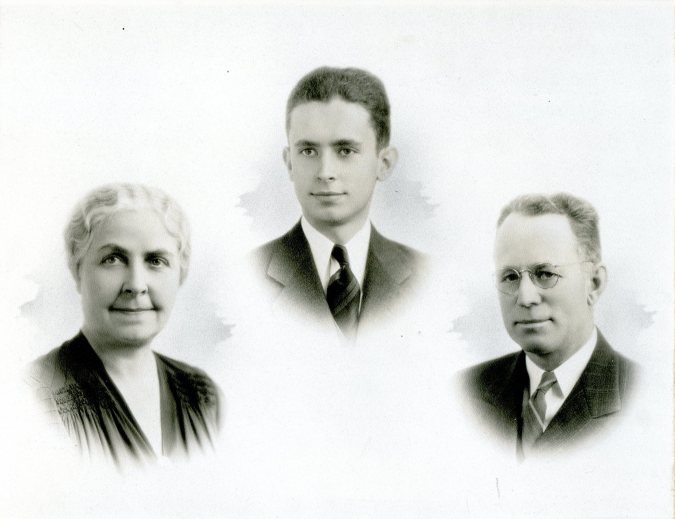 Grandma, Daddy, and Grandpa. Photo taken at a studio in Atchison, Kansas, December 7, 1941. 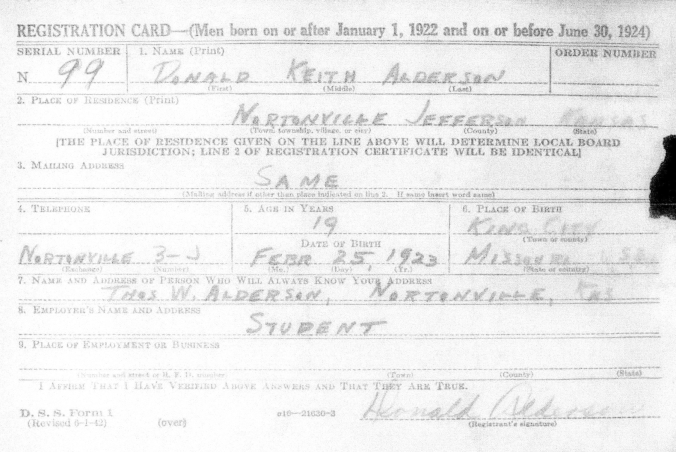 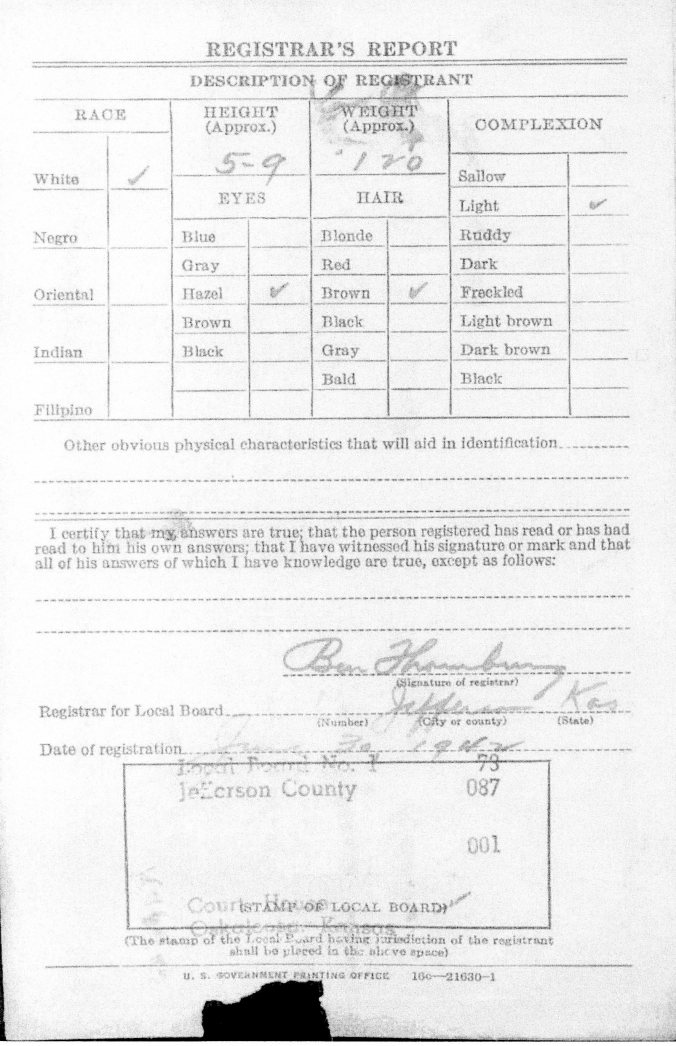 Daddy’s Registration Card for service in World War II. I found this on Fold3.

The American entry into World War II coincided with Daddy’s college years. In 1941, he had enrolled at the University of Kansas (then known as Kansas University) in Lawrence. Many of his classmates were called to serve. But not my father. According to family stories, he failed his physical exam. The doctors found a very slight heart murmur, one that might have gone undetected had he not been so thin.

He dropped out of school and returned home, which at that time was Nortonville, Kansas. And here the story I most want to know is missing. How did this small family of three take the news of Daddy’s military disqualification? Did Grandpa, an injured veteran, want his only son to fight? Or, were Daddy’s parents happy he would be spared the experiences Grandpa had known? Did Daddy want to fight?

The fact that I grew up knowing so little about Grandpa’s war service may be related to an especially painful moment in their family life. I picture a recognition, that the son wouldn’t follow in his father’s footsteps, serving in the military. It’s not hard to see the little community of Nortonville, Kansas, keeping track of “soldier boys” heading off to war and noting that Donald was staying home. Did my grandparents feel isolated, left out of stories of the boys heading out and the fathers reliving what war had meant to them? Easier for me to imagine is this: the report of my father’s heart defect certainly sent my grandparents reeling. Their first son had died in childhood. Grandma once told me, “It’s not right for a mother to bury her children.”

Whatever they felt at the time, and in the many years that followed, is a secret they held. They got on with life, that was their way. And that’s what Daddy did. He returned to school, quickly caught up on his studies, and began what would become a lifelong passion–student government at KU. Here’s a picture of him (back row, right) with the members of the ISA (Independent Students’ Association) Council. Daddy was the business manager.

Daddy went on to serve in KU’s administration as Dean of Men for many years. After his death, we set up a memorial fund to honor students like him. Here’s how KU decides on the recipient.

This award goes to a graduating senior whose campus contributions benefit other students. Recipients may not be the highest elected officer of an organization, but they are an officer or member who can always be counted on to see through a project, program or service. The recipient of the Donald K. Alderson Memorial Award is always concerned about the greater good for fellow students.

The great wars of the twentieth century served as cauldrons to shape the young people who fought them. But certainly there are other ways, better ways, to find one’s calling. I’m glad my father found his on a university campus. I’m glad, too, he never knew firsthand the horrors of war.

2 thoughts on “My Father”