In 1919, Valentine’s Day fell on a Friday. Around King City, Missouri, people were exchanging cards and hosting parties.

The King City Chronicle ran this simple question in the February 14, 1919 paper. And the next week, they ran notices of parties like this one.

My grandmother didn’t attend a party. Instead, she stayed home and wrote a letter to Grandpa, one of only two letters that survive from their wartime correspondence. (*)

Her letter, which runs in full at the end of this post never found its way to Grandpa. The envelope records the long and unsuccessful journey–to Europe and back, over four months–as the military attempted to locate my grandfather.

In the middle of the envelope runs the address Grandma thought was correct: Private Thos. W. Alderson/Evacuation Hospital No 24/American Expeditionary Forces/A.P.O. 798. The American Expeditionary Forces presumably sent the letter to France, as did the A.P.O. number, 798, which belonged to the area of the Mesves Hospital Center, where Grandpa had been convalescing. But the Evacuation Hospital No. 24 was incorrect, and that mistake belongs to Grandpa. He thought he wasn’t getting his mail as regularly as his buddies and decided to have Grandma send letters directly to him; but No. 24 was not the number of a hospital, but rather the number of a unit of a larger base hospital (whose number he didn’t have).

Over his name, notice the postmark (in purple) with the date of April 17. I’m unable to read the complete postmark to know if this was stamped in France or after the letter’s return to the U.S. I’m guessing in France, as letters took weeks to make the trip across the ocean and to the military camps.

In any case, on the postmark (or beneath it?) is a pointing finger and “RETURN TO WRITER” stamp. That return trip included a stop at Camp Funston, stamped in all capital letters in purple. And then, on the left edge of the envelope, a handwritten note states, “No Record, 6/12/19.” 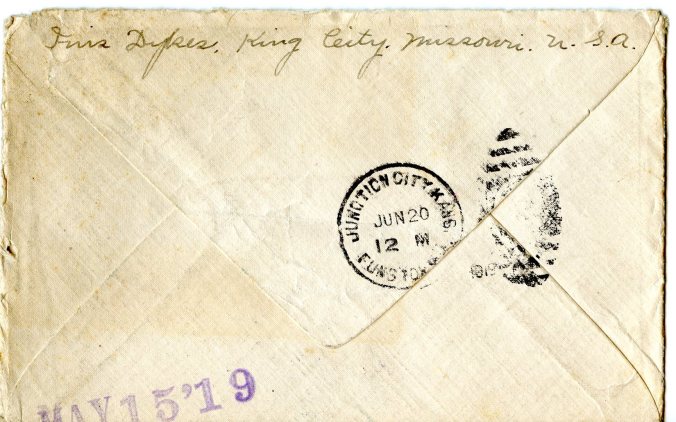 The back of the envelope carries still more information. May 15, 1919, stamped in that same purple as CAMP FUNSTON on the front, makes me believe it was received there on that may date. And the postmark of June 10, may indicate the day the letter finally started back to Missouri, to Grandma.

So, where was Grandpa? By February 1, two weeks before Grandma wrote her letter, he had already begun his long trip home. Notice the location he gives, St. Agnan, France. This was the first time he’d identified his location during his service in France. The letter begins on the right half of the page. 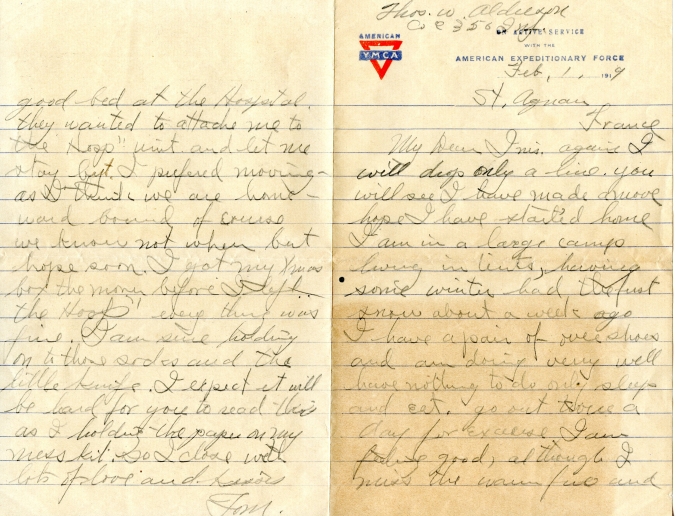 My Dear Inis, again I will drop only a line. You will see I have made a move, hope I have started home. I am in a large camp living in tents, having some winter. Had the first snow about a week ago. I have a pair of over shoes and am doing very well. Have nothing to do only sleep and eat. Go out twice a day for exercise. I am feeling good, although I miss the warm food and good bed at the Hospital. They wanted to attach me to the “Hosp” unit and let me stay but I preferred moving—as I think we are homeward bound of course we know not when but hope soon. I got my Xmas box the morn before I left the Hosp. Every thing was fine. I am sure holding on to those socks and the little knife. I expect it will be hard for you to read this as I holding the paper on my mess kit.

So I close with lots of love and kisses

In this letter, Grandpa included cartoons he’d clipped from the newspaper, The Stars and Stripes. Military humor.

Here’s Grandma’s Valentine’s Day letter (although without a mention of the day). I haven’t transcribed it, since her handwriting is legible. Her letter is what my family refers to as “newsy,” and it is that. Notice her references to housekeeping and motherhood, which she seems to be looking forward to. The baby she writes about, the one that earned her the title of “Aunt Inis,” was born to her older brother Charley. Join me in wondering about the expression, “busy as a cranberry merchant”! But mostly, enjoy getting to know my grandmother. 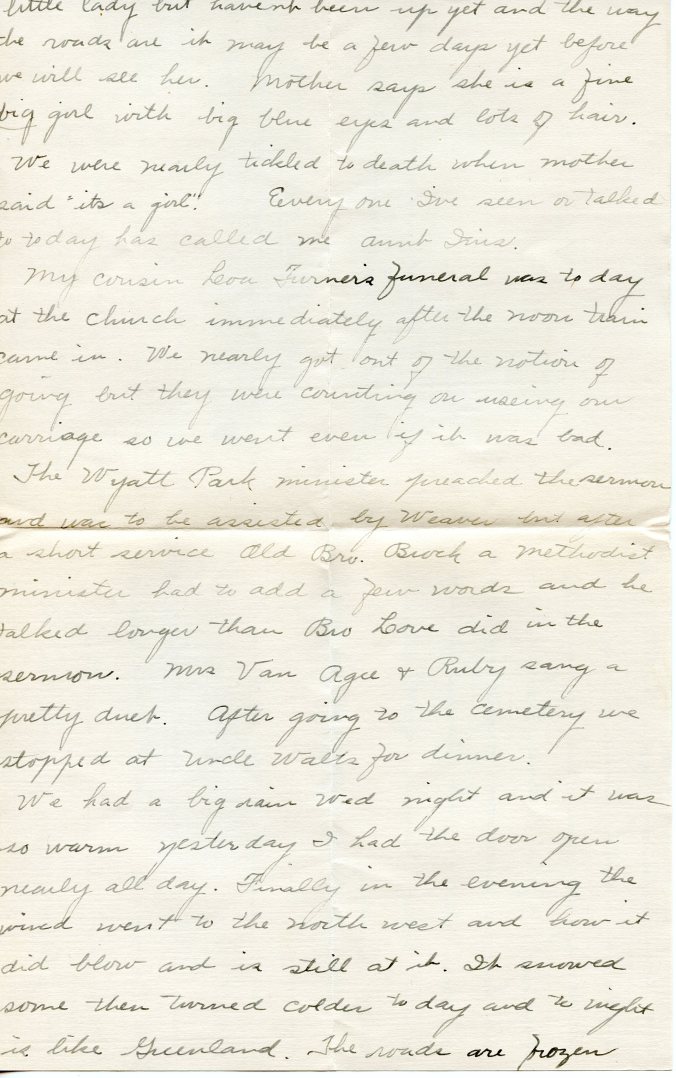 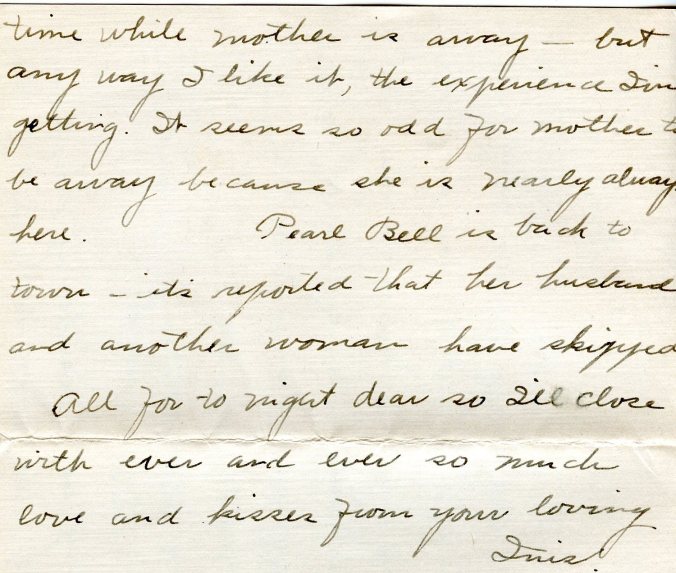 Happy Valentine’s Day, Grandma and Grandpa! This is my love letter to you.

(*) The second letter returned to Grandma is dated February 16, 1919. More on that in an upcoming post.