The year ended on a sour note for Grandpa. Out on a walk one afternoon with his buddy, Tom Wright, both recuperating from battle injuries at the Mesves Hospital Center in the Loire Valley, they ran into a man named Stanley Brown. 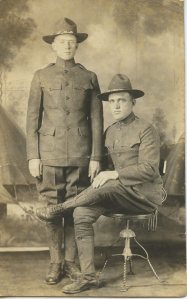 Undated photo, probably near Camp Funston, 1917-18. Grandpa is standing next to Wright.

Tom Wright, a fellow from Co C that is here with me and I went over to see Wayne yesterday afternoon and on our road back stopped at the Canteen to get some candy. The line was real long so we decided to come back without it. And just as we were starting, there was a nice looking fellow saw the 356 on my cap and says, “Say” what co are you out of? So I told him. After talking a few minutes with him he says do you know Tom Alderson in that co? I laughed and then said this is him you are talking to. He then stuck out his hand and says, this is Stanley Brown.

I was showing him a picture of yours that I have in the back of my watch, and he pulled out his pocket book and showed me the same picture. So Wright has been teasing me all day about it.

A couple of weeks later, on January 6, 1919, Grandpa reported that Stanley Brown had undergone another operation, “A piece of dead bone taken out of his leg, is what a boy was telling me.” Then he admitted, “I have been laying off going up to see him.” That’s the last time Grandpa wrote about Stanley Brown.

This story might end on the wards of the Mesves Hospital Center, Grandpa’s feelings hurt. But that seems unfair to my grandmother.

Undated photo of my grandmother as a young woman.

Pulling out the lens to see the many women on the home front–charged with letter-writing and knitting and purchasing Liberty Bonds and keeping up the spirits of their soldier boys, as they kept up their own lives and livelihoods–it’s not hard to imagine the emotional burden they carried during the long months of separation from the men sent off to a distant war.

Consider the slow pace of the mail, which took weeks (months) to find its way to the battlefield and back home. After Grandpa was wounded, his mail was sent first to his company before being routed back to the hospital, a journey that didn’t always result in delivery. (More on that in a later post.) So, it was difficult to stay in touch, and perhaps difficult to maintain a friendship.

And then there’s the Midwestern farming culture of Grandma’s family, one that expected young women to marry and have children and set up a farmstead of their own. Were young women like Grandma expected to put their lives on hold, to wait for men to return, some injured, others dead?

In Grandma’s case–and here I struggle to find a word that gathers up what I picture as her family’s concerns and expectations, perhaps even pressure, to maintain a sensible course in her life at this time. Maybe they counseled her to keep open her options. Or maybe Grandma had questions about Grandpa, whom she met just before he set off for training. In any case, it was her family (and his) who set up introductions. That’s how she came to know Grandpa, through his Aunt Ettie (Hale). And Stanley Brown came into her life when her Aunt Susie (Dykes) Frank, who lived in Madison, introduced them there.

Why did Grandma write to these two men, and why did she give them each the same photo to carry with them into battle? I don’t know. Nor do I know the intentions of Stanley Brown, only that he was more than a wartime pen pal. He would stay in the picture of my grandparents’ sometimes bumpy romance in the months ahead.

3 thoughts on “Adding Insult to Injury”