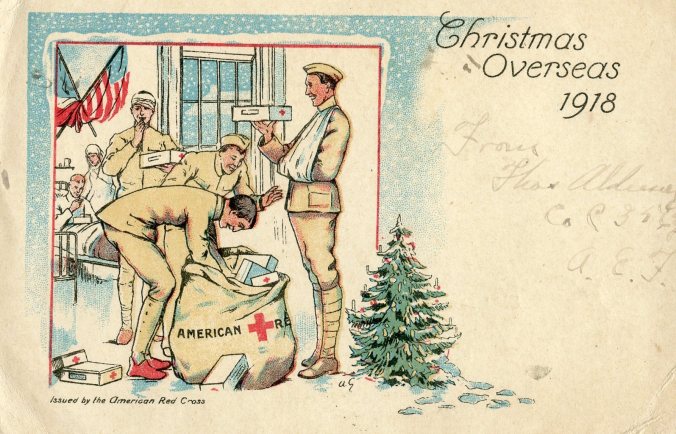 Christmas brings back lots of memories for me. Today, I’ll remember three memorable Christmases that feature my grandfather–1918, 1943, and 1960.

Grandpa spent Christmas at a hospital south of Paris, recovering from the injury he sustained in battle, just days before the Armistice. Although he couldn’t identify the location, other than “some place in France,” most likely he recuperated at the Mesves Hospital Center, in the Loire Valley. The clue to his location can be found on the other side of this Christmas card. 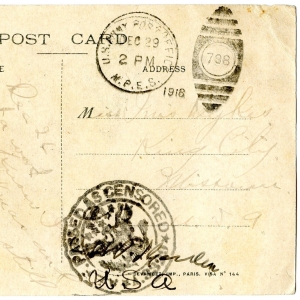 The number 798, stamped in the upper right corner, is the APO (Army Post Office) for village of Mesves-sur-Loire, a detail explained to me by a researcher at the National World War 1 Museum and Memorial (Kansas City). (1) Hospital buildings stretched between the two small villages of Mesves and Bulcy. In November 1918, more than 20,000 American soldiers were hospitalized in this area. Grandpa scribbled a short note on the card:

Just a word to let you know I had a Merry Xmas and am feeling fine am still in the Hospital will write soon.

On December 23, Grandpa sent a letter to his parents. I found it printed in the King City Chronicle, February 7, 1919. Mail from France usually took 4 – 6 weeks to arrive.

Some Place in France.

I am still in the hospital but am just like a well man, feeling fine, have plenty to eat and sleep good. I am working in the diet kitchen about six hours a day, and that is just enough to make it interesting for me.

I think I will go over to the town tomorrow, as we boys have all pitched in and are going to buy the two nurses in our ward a present, as they are awfully nice and are working hard to make Xmas pleasant for us. We have our ward all decorated and are going to have a Xmas tree. The Red Cross is working hard getting ready for Xmas. I saw what they were fixing. This afternoon they are taking a pair of new socks and filling them with nuts, candy and cigarettes for each soldier.

I don’t think I will be able to get my package from you as my mail will go to the Company and they are so far off.

In fact, Grandpa didn’t receive any mail for months. All letters and packages went to his “official” address, to the location of the remaining members of his Company C, 356th Infantry, 89th Division. Most, he would learn, were in Germany, along the Rhine, as part of the Army of Occupation.

But even without incoming mail, Grandpa kept writing and managed to send one small gift to Grandma–a silk-embroidered postcard. 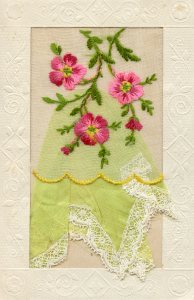 These cards were especially popular during the war. (2) Some were hand-embroidered on a mesh support (here, the area of the flowers), others by machine. Some had only embroidery and others, like this one, featured a pocket to tuck in a card and/or a handkerchief (this one is too small to be anything other than a suggestion of a usable handkerchief). After being embroidered, the piece went to a print shop in Paris to be attached to a cardboard frame that served as a postcard, with a mailing address on the back. Grandpa chose to put this one in an envelope, postmarked December 12, 1918. 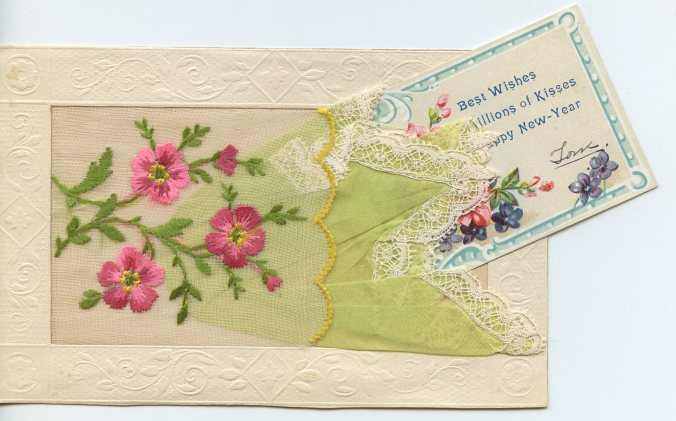 On the back of the small card, he wrote, “Dec 10. Dear Inis. How are you? I am getting along fine but still in the Hospital. As usual it is raining today. Hoping this reaches you O.K. Lovingly, Tom”

Grandpa reported on the festivities of Christmas Eve and Christmas Day in a December 29, 1918, letter to Grandma, which included “we had a splendid Xmas” . . . 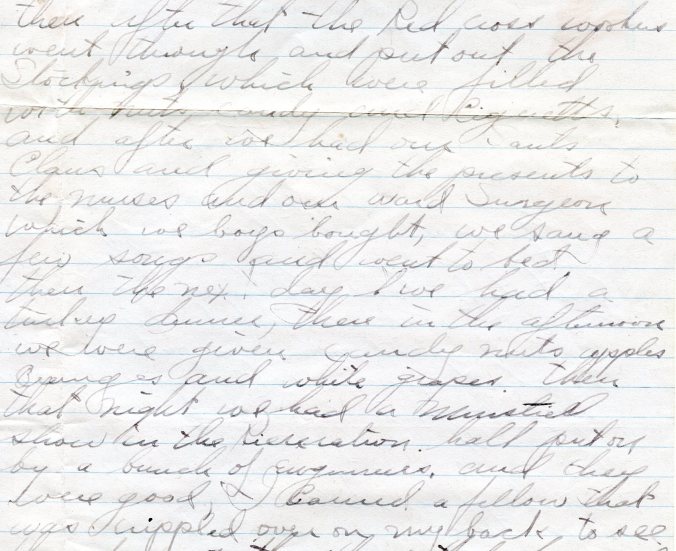 We had a splendid Christmas had a tree and we decorated the ward so things had a real Xmas spirit. About nine o’clock a bunch of nurses mixed with a few male Voices went through all the wards singing Xmas carols which was very nice. Then after that the Red Cross workers went through and put out the stockings, which were filled with nuts, candy and cigarettes, and after we had our Santa Claus and giving the presents to the nurses and our ward surgeon which we boys bought, we sang a few songs and went to bed.

Then the next day we had a turkey dinner, then in the afternoon we were given candy, nuts, apples, oranges and white grapes. Then that night we had a Minstrel show in the Recreation Hall put on by a bunch of engineers (3) and they were good.

I carried a fellow that was crippled over on my back to see the show.

Grandpa and Grandma were living in Nortonville, Kansas in 1943. They may have had Christmas there with my father, home from college (University of Kansas). There’s a better chance they celebrated the holiday with their families in Missouri. In any case, Grandma and Daddy had some fun at Grandpa’s expense. I know about this joke because  the Associated Press circulated the story on their wire. And I know about that because Grandma’s sister, my great Aunt Mattie, contacted the AP with what she considered a funny Christmas prank. 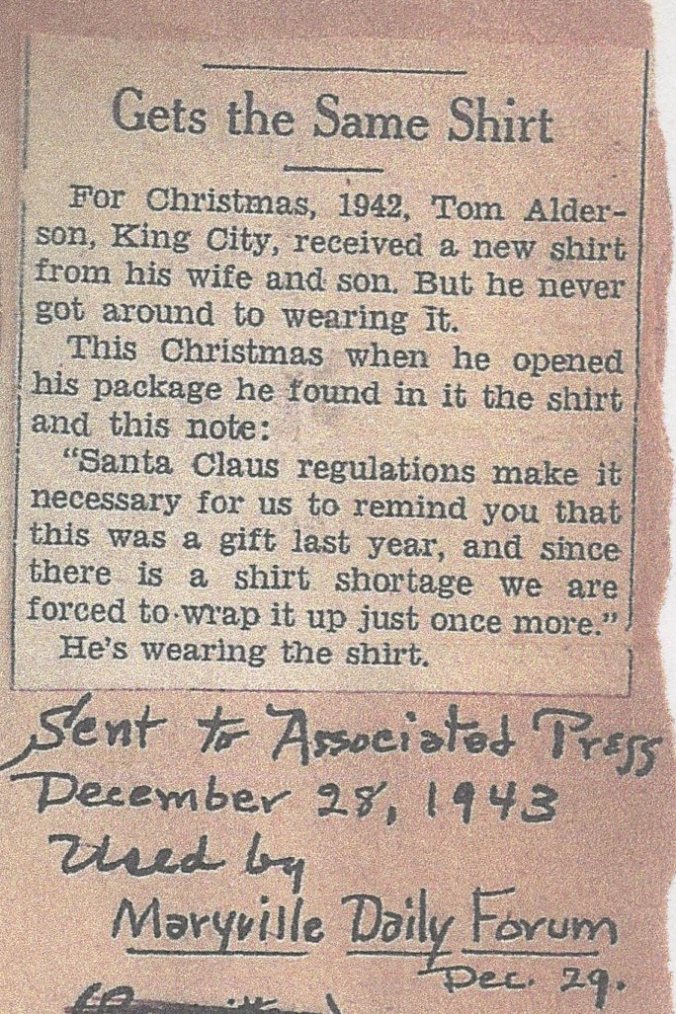 My great Aunt Mattie glued clippings of her published newspaper stories in a scrapbook. She carefully annotated each one.

What Aunt Mattie hadn’t imagined (couldn’t have imagined) was the appearance of the article in a newspaper in Springfield, Missouri. That’s where a World War 1 buddy of Grandpa’s, a man named Clifford Melton (Ozark, Missouri), saw it. 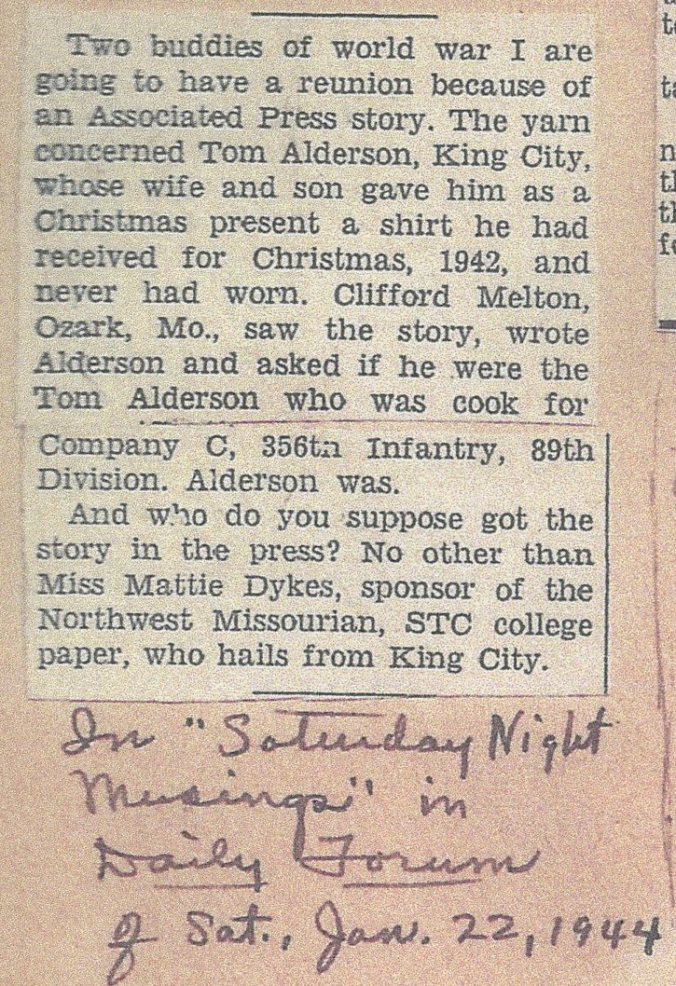 Christmas memories from my childhood include my grandparents, who would load up their car (or pickup truck) in Effingham, Kansas, and drive to our home in Lawrence. 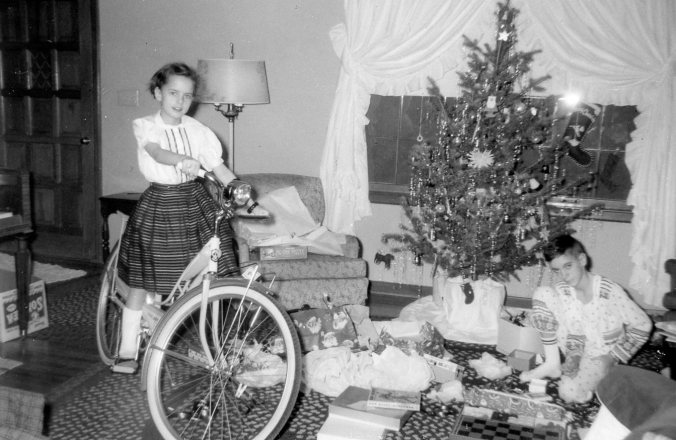 Christmas in Lawrence, Kansas, 1960. My first bike, from Grandma and Grandpa.

Christmas Eve that year, if my memory is true, I checked out the presents under the tree and didn’t see much for me. As we opened gifts on Christmas day, I went to bed a bit concerned. But that mood changed in the morning when I saw what Grandpa and Grandma had brought–a bicycle named the Pink Lady. The frame was pink. Shiny fenders framed whitewall tires. A little medallion at the front featured the “pink lady.” I was eight that Christmas, maybe a bit young for a big bike. Mother recalls that Grandpa thought I was ready for a bike, as my older brother and sister already had theirs. He and Daddy assembled it, but not properly. It landed in the bike shop not long after Christmas! But the Pink Lady saw many good years of service. I still have her. 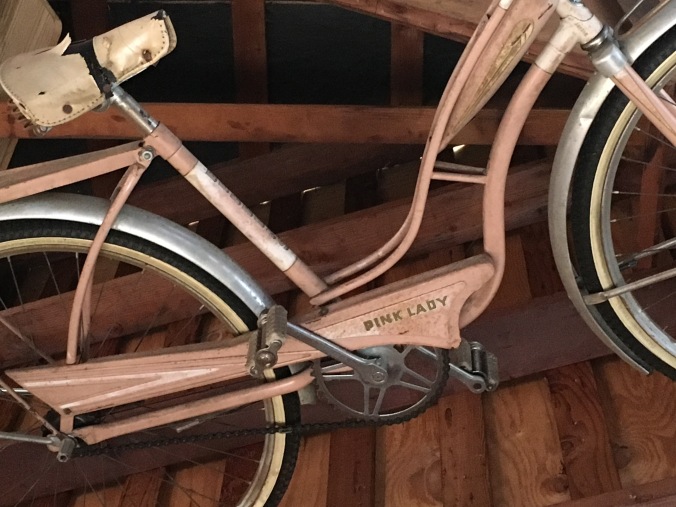 Older, but still fine, the Pink Lady mostly stays in the garage. Occasionally we go out for a spin.

Merry Christmas! I hope the holiday is filled with your own fond memories of family!

(1) The National World War 1 Museum and Memorial has been so helpful to me. https://www.theworldwar.org

(2) I like the overview of the silk embroidered postcards at this site from the Netherlands. Click on each picture and learn more: https://trc-leiden.nl/trc-digital-exhibition/index.php/silk-embroidered-postcards

(3) By engineers, I presume he means men serving at the Mesves complex as construction and repair specialists, men who had done important work at the front in creating and maintaining roads, rail lines, water supplies and mechanical equipment.

2 thoughts on “Christmas with Grandpa”