At 1 a.m. Grandpa woke up (if he’d slept at all) to the sights and sounds of the first major battle fought—and won—by American forces. The artillery used 3,000 pieces of heavy equipment to fire more than a million shells. They lit up the night sky and caused, in eye-witness descriptions, a deafening rumble that felt like an earthquake.* For the next four hours, until 5 a.m, Grandpa and the other soldiers—nearly half a million—stood ready in dark, mud-filled trenches, their clothes soaked from days of constant rain, waiting for the command to “go over the top,” the term for leaving the trenches and running, guns blazing, into the no-man’s land that was the Western Front.

The battle of St. Mihiel lasted five days. The goal was to claim back an area held by the Germans since the opening weeks of the war in 1914. The area, or salient, was a triangle, with the Meuse River and the town of St. Mihiel at the western point, Haudiomont (near Verdun) at the far north, and Pont-à-Mousson, near the Moselle River, on the east. 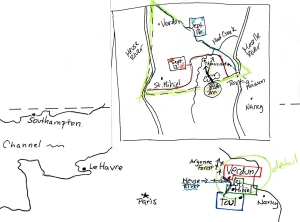 My bad map makes another appearance, with a detail of the St. Mihiel Salient. Grandpa’s group, the 89th, moved from the south.

Forests and rivers cut through low hills, occasionally creating broad plains. The Germans had transformed the landscape into a warren of deep trenches, long barriers of barbed wire and hidden machine-gun nests.

On that morning of September 12, Pershing led the American First Army (including the 89th Division), which attacked from the southern side, and the French forces, who moved from the eastern side. The French and British also participated from the air, with 1400 aircraft forming the largest air force to date.

General Pershing had long argued the strategic value on taking this area (which the French had tried and failed to do), as a way to approach Germany, and take the important rail center at Metz. He also convinced the Allied command that an independent American force was up to the challenge. The battle became critically important to prove Pershing’s confidence.

Pershing succeeded, and in part because the Germans had already anticipated this offensive and begun to withdraw from the area. A letter found on a German solider suggested low morale may have been a factor. “The men are so embittered that they have no interest in anything,” the German wrote, “and they only want the war to end, no matter how.” (1)

George English, a member of the 89thDivision, and author of its history, described the final night of September 16. “The advance through the gathering dusk and the deep night, though devoid of excitement, was stirring to the emotions of every participant. The weather had cleared and brilliant stars were looking down upon the field of battle. The continuous roar of the artillery and the rattle of small arms had ceased.” (2)

Thousands of miles away from the war, Grandma awoke that same Thursday to a nice autumn day. The local newspapers reported “fair weather,” meaning mostly sunny but cool. She and her family started their day early, tending animals and having breakfast before working in the fields or the yard or the house, or going to town for supplies. Since March, they had followed President Wilson’s wartime program of daylight saving time, meaning their days no longer followed the sun, but the clock. Some farmers objected to this (and led the effort the next year to abolish it) and felt like a precious morning hour was being stolen from them.

I doubt Grandma’s family fussed over this. They were a hardy, no-nonsense bunch. If there was work to do, they did it.

From a family album, probably around 1915.

But on this September morning, when Grandma headed outside for morning chores, dew clinging to the hem of her dress and patches of fog lazing over the fields, I wonder if she let herself daydream about Grandpa. Did she have an inkling that he’d been moved from the safety of his cook’s job and sent to the front lines? And I wonder, too, what she knew of war. Both her grandfathers had been in the Civil War, one fighting for the Confederacy and the other on desk assignment for the Union. Did they ever share their experiences, or their opinions of war?

Grandpa Martin (as they called their mother’s dad) died in March, 1918. He was a favorite and might have shared stories. But if he did, the stories didn’t survive into my generation. Nor did those known to Grandfather Dykes (father’s side), who lived with them in King City until his death in 1901. Grandma was only nine when he died, and may have been too young to have heard (or understood) his war stories. Aunt Mattie, Grandma’s older sister, wrote in her 1971 diary, on a day spent researching family history, “Oh how I wish I had asked Grandfather Dykes about his war service.”

The events of World War 1 were slow to make their way back home. The King City Chronicle, which only published on Fridays, ran stories a week or two after major events. On September 20, under a headline of “Verdun Freed by Americans,” they wrote, “Official dispatches were still delayed and the full scope of the victory won by the Americans in their first independent action could not be gauged.” They also ran a photograph (as did many American papers, all using the same caption) of a French village liberated by the Americans in August. The unnamed photographer focused on the women and children walking in the ruins.

Letters took 2-4 weeks to cross the Atlantic. In the meantime, I suspect Grandma did wonder and worry about Grandpa. She would have to wait for the first letters to arrive in October to hear about his experiences during the St. Mihiel Offensive; I’ll post those next week. While she waited, Grandma carried on with her chores.

*This summary is pulled from many sources, all agreeing on the major points.

2 thoughts on “Bombs Bursting in Air”