By the end of August, Grandpa had seen his first battle and (for unknown reasons) spent time in a field hospital. He was back with his group, resting behind the lines, when he wrote Grandma from a “nice little town with fair accommidations” on August 26. That’s when he fried up some chicken. 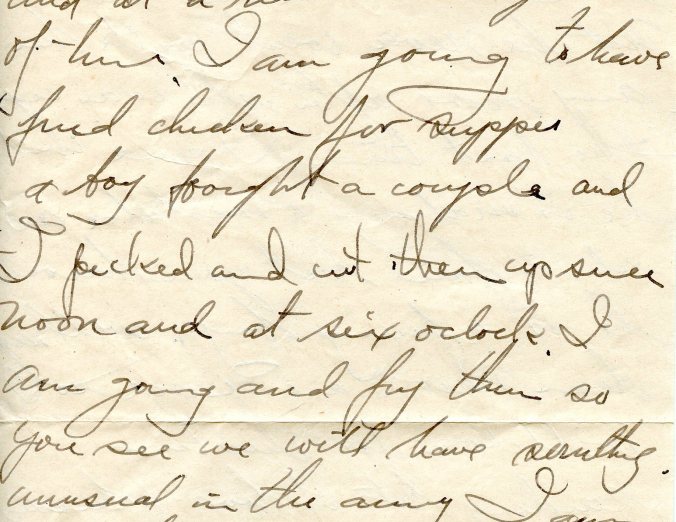 Fried chicken is something I remember from my childhood, especially for Sunday dinners in Effingham. But I picture Grandma as the cook. She took the chicken by the neck, chopped off its head on the stump in the backyard (a vivid memory, for sure), plucked the feathers, cut up the parts, and then prepped it for cooking. She put the chicken parts in a paper grocery bag with flour and her special seasonings, and shook the whole bag until she knew every surface was coated. Then into an old cast iron skillet for browning before it went into the oven to finish. It was perfect.

Did Grandpa use this same system in wartime France? He’d been a farmer before the war and certainly knew his way around farm animals (and home cooking). Here’s what he offered for sale before he left for training at Camp Funston in 1917. 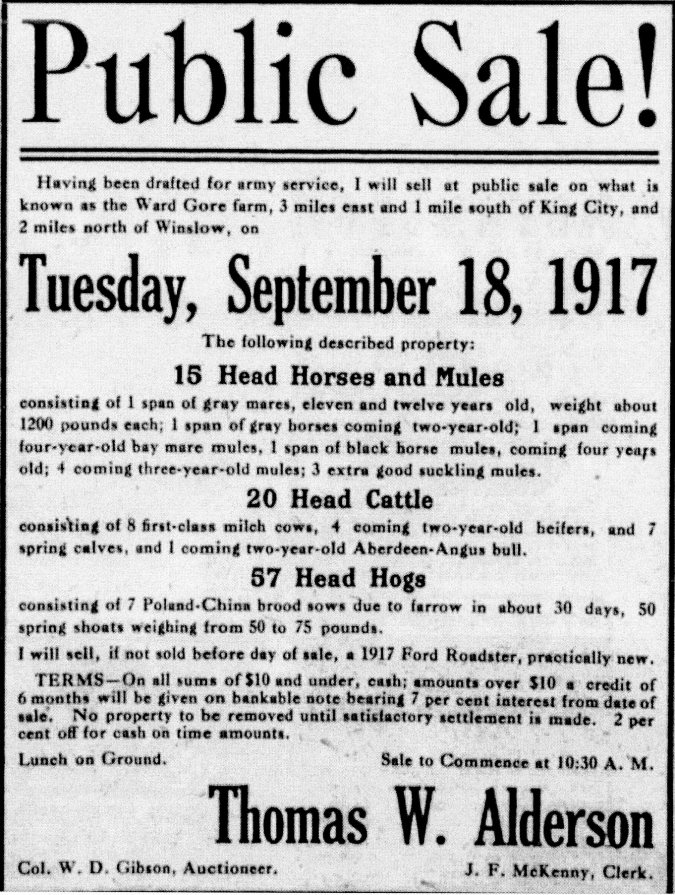 And, after the war, he and Grandma ran a grocery store in King City, Missouri. My mother remembers hearing stories of how they’d go home for lunch, butcher meat for special orders, and then return to the grocery store in the afternoon. I found a notice in the local newspaper that seems to confirm this family tale.

An ad that ran in the November, 1923 King City Chronicle.

When I first started reading his letters, I became curious about how Grandpa was selected and trained to be an army cook. Was it his farm experience? I wondered, too, if it was common to train cooks to be combatants, and, in Grandpa’s case, barbers, too? I haven’t found answers to these questions, not in military histories or online. I wrote to NARA, the National Archives and Records Administration, which holds military records. The archivist wrote back, “Unfortunately, I have been unable to locate any information about the use of cooks as combatants in any of the works in our library’s collection.” He did provide three links.

1916 Manual for Army Cooks at https://archive.org/details/manualforarmycoo1917unit.  This publication, with its detailed descriptions of calories and cuts of meat, etc., seems to have been written for the professionals who trained Grandpa. His job was to get the food on the table.

I’m left to form a picture in my mind of Grandpa cooking along the Western Front, and, on that August day in France, as a man who could put fried chicken on the table like a pro.

Here’s the full letter, punctuation changed but misspellings included. Notes: This is the first letter that has a portion cut out by the censors, perhaps the name of his group. He mentions how he’s getting Grandma’s letters, but wonders if his aren’t getting through. 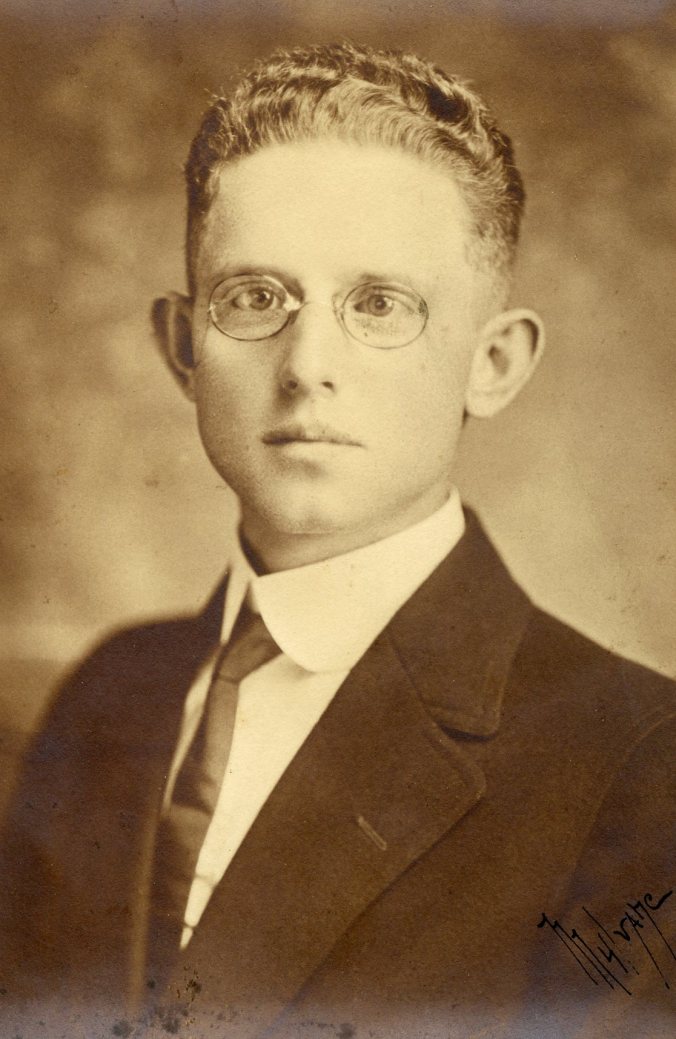 And then he mentions his younger brother Marshall, a man known to all of us as a character, or as Grandpa writes, a “funny boy.”

Some place in France.

You can see by the date that you are attending the Chautauqua now. Any how it is the time. How are you? I am fine, back to the co feeling a little tired this afternoon as we got up a little early this morn. Our [section cut out by censor] moved back for a week’s rest. We are at a nice little town with fair accomidations. Our boys are all in good shape. They sure were under some artillary Barage one hour last week. The captain made a little talk night before last and complimented the men highly on the way they stood it. I tell you we are lucky to not even have a man wounded.

I got a couple of your letters a few days ago. The one with the pictures was great. I showed it to several of the boys. They all thought it a great letter. The other one was the one you [section cut out by censor] the 4thof July and up untill that you hadn’t yet got any of my letters. I sure think it funny. I am getting all your mail and at a reasonable length of time.

I am going to have fried chicken for supper. A boy brought a couple and I picked and cut them up since noon. And at six oclock, I am going and fry them so you see we will have something unusual in the army. I am at the Y.M.C.A. now. The boys are lining up to buy the candies and tobaccos that they can get, but they don’t have a great deal.

You ask me if Marshall ever mentions Aline. He does not. He never went with her any more after she was up the last time. I sure think he is making a mistake as she is fine. But you know he is a funny boy. Well my dear, news are scarce so I will close for this time sending lots of love and kisses. 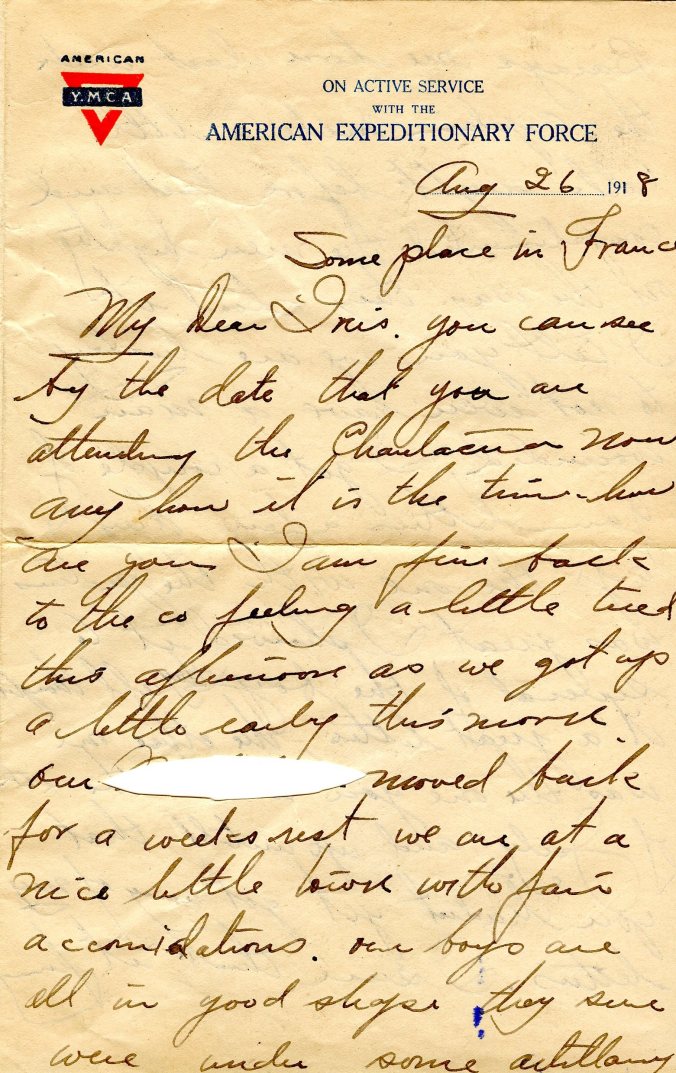 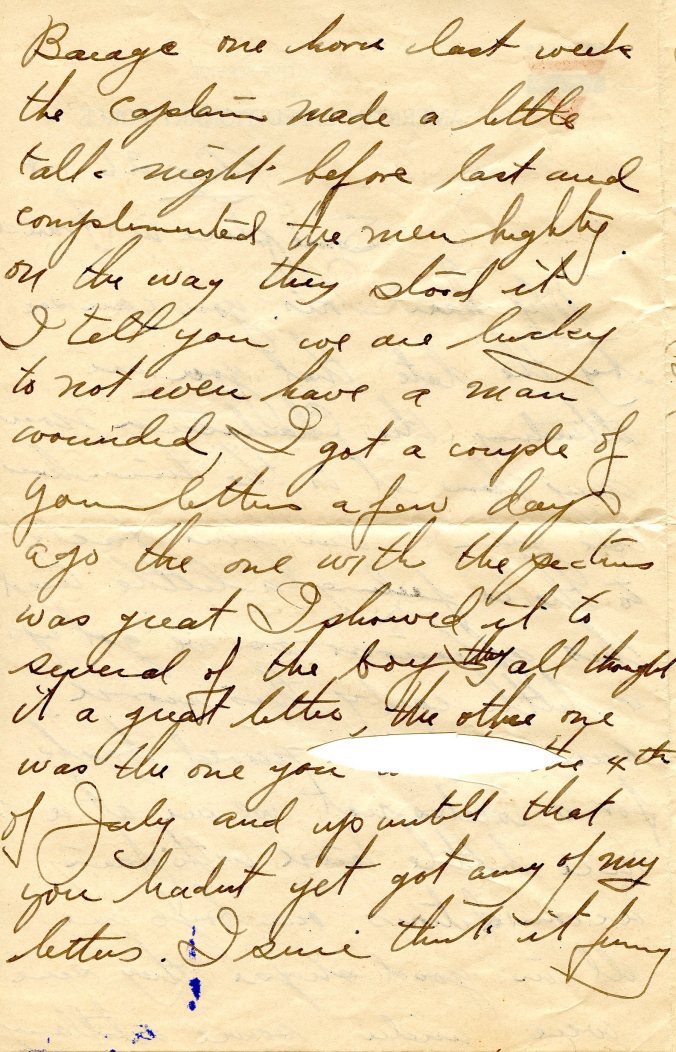 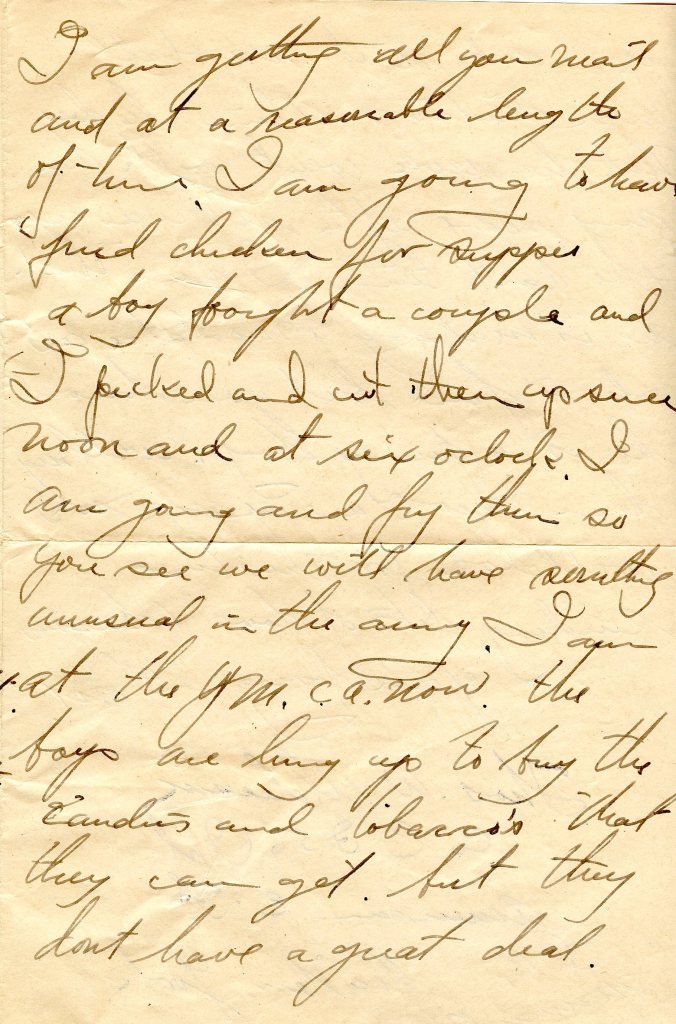 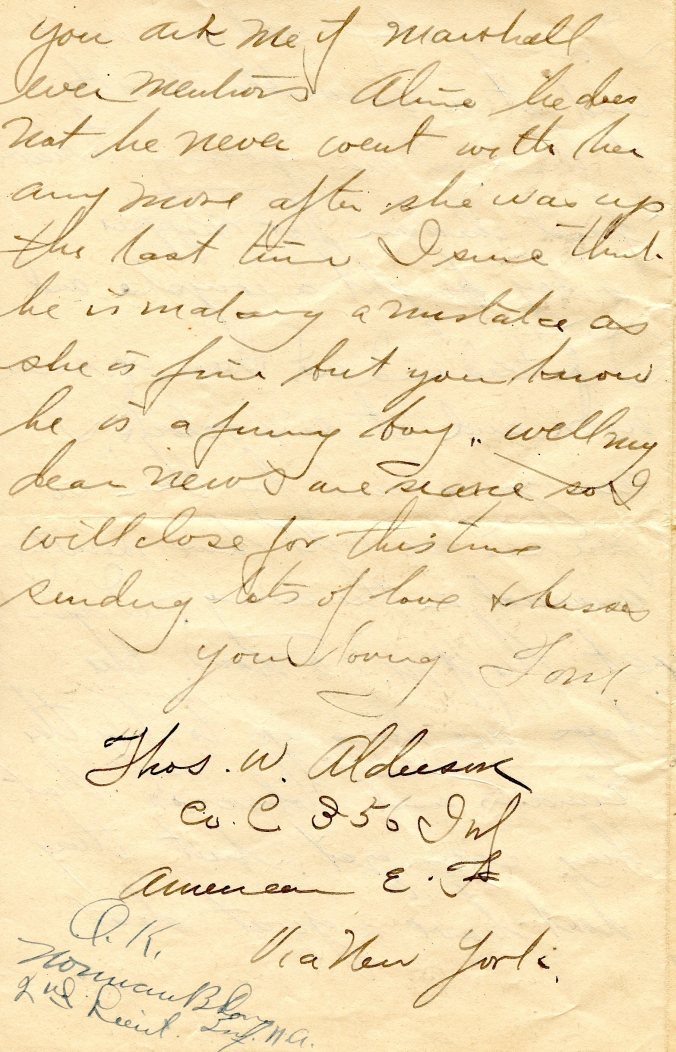 3 thoughts on “Fried Chicken on the Front”