For reasons he didn’t say, Grandpa was taken to a field hospital on August 15.

Came here Thursday night. Didn’t want to come very bad but they thought it best so I have had it pretty quite here. They gave me my clothes this morn. I got up, dressed, then went for a bath and shave which made me feel quite a lot better. So I think I will be able to go back in a couple of days. I am a little weak yet but am anxious to get back as the Germans threw a barage at our men for about an hour about three oclock this morn and I know they will have lots to tell me.

This letter, from August 19, sent me reading “between the lines.” What caused his illness?

The first clue is his placement at a field hospital. The U.S. Army typically set up five arenas for medical care, according to the National World War 1 Museum and Memorial in Kansas City. Here’s a summary from their exhibit:

Trenches, on the front line. Medical personnel immediately treated some of the soldiers and returned them to battle. They also sent others to the next location, if they needed additional medical attention.

Advanced Dressing Stations, 400 yards away from the fighting. The wounded were stabilized (bleeding stopped, medications given, broken bones set). As needed, the soldiers were moved again.

Field Hospital, 1 ½ miles away. Emergency operations were performed here, and diseases like pneumonia and influenza were treated.

Base Hospital, 23-38 miles away. Patients stayed here for convalescence and physical therapy.

A respiratory ailment—something that Grandpa had at Camp Funston, several times—seems a likely reason for his hospitalization, at a place that specifically treated infectious diseases like pneumonia and influenza. One of these could have been on the mild side, explaining his comment “didn’t want to come very bad but they thought it best.” Also, a week’s stay matches the care of those illnesses. So does his admission that he feels weak.

He didn’t have a physical injury, it seems, because in the next letter he writes, “I tell you we are lucky to not even have a man wounded.” This leads me down another path: Where was he when he took ill? His group was in the Toul Sector, having been in battle to win back an area earlier seized by the Germans. Grandpa was cooking during this activity, meaning he was some distance back from the front lines (I presume). Since several groups in the 89thDivision were stationed throughout the Toul area, it’s hard to know where exactly Grandpa was during the heavy bombardment, described in the History of the 89thDivision.

“On the night of the 7th-8thof August, the front line battalions . . . were subjected to a most severe bombardment of gas shells. The first attack started at 10:30 in the evening and continued until midnight. The shelling then ceased until about 1 o’clock and was then resumed for nearly two hours more. Between 9,000 and 10,000 shells were fired during the bombardment. About 95 per cent of the shells were of mustard gas and phosgene, interspersed with many high explosives.” (published in 1920, p. 71)

Some of the field hospitals near Toul took “gassed cases,” according to the Army’s official history of the war: http://history.amedd.army.mil/booksdocs/wwi/fieldoperations/chapter18.html

I asked my chemist husband about the effects of that exposure and whether it might have caused Grandpa to take ill and remain “weak” days after the attack. “No,” he said initially, “mustard gas typically burned the skin, and also, in bad cases, air passages.” Then, when I reported that contemporary accounts named phosgene as the second gas used in the Toul offensive, he said, “Well, then, maybe,” adding that exposure would depend on the winds and where they transported the gas, on the presence of rain (to neutralize it). Also in the History of the 89thDivision, p. 73, I found the observation that some soldiers “removed their masks when the shelling was over, and others next morning went to their kitchens in the low ground, in ignorance of that property of the gas which causes it to vaporize again at the rising of the sun.”

The last clue in his letter–“They gave me my clothes this morn”–might suggest his clothes were initially removed to be decontaminated from gas, or from the ever-present lice, or for general cleaning. It’s one clue among several in this letter that begs the question, Why was Grandpa hospitalized? Here’s the full letter, punctuation changed to make it easier to read. I’ve kept his spelling. The scanned original follows the transcription.

Notes: He mentions some buddies from home–Chester Marshall and Clyde Shearer. The reference to “bunch of men going to the service now” confirms what the King City Chronicle would announce in a September 6 headline, “13,000,000 Men Called by War Department to Register September 12. 18 to 45 Age Limits.” The term “Chau” is Grandpa’s abbreviation for the big festival called Chautauqua. Mr. Stanton preached at the King City Christian Church. Grandpa mentions the cook shack; more on his duties as a cook in the next post.

Some place in France

Here I am and Sunday afternoon and you can imagine what I am thinking. Although I am at a field hospital. Came here Thursday night. Didn’t want to come very bad but they thought it best so I have had it pretty quite here. They gave me my clothes this morn. I got up, dressed, then went for a bath and shave which made me feel quite a lot better. So I think I will be able to go back in a couple of days. I am a little weak yet but am anxious to get back as the Germans threw a barage at our men for about an hour about three oclock this morn and I know they will have lots to tell me.

We are with Co B now, I mean in the same cook shack. You ask me in one of your letters about Chester. We are still together. We have out side of the few, the same bunch we left Funston with. Machine Gun co. is on the line at the same place we are.

I had quite a long talk with Clyde Shearer a few nights ago. He told me he had only gotten one letter from Edna since he landed in France. So you see I am leading all the boys in mail so far, but I know the reason. I was glad to hear of your wonderfull washing machine. I want you to be an expert at it as you know I have told you I don’t like to wash, but say I am a cat at the cooking stunt.

I see by the last paper that there sure is a bunch of men going to the service now. I only think what goes now in reserve army. I don’t think this will last forever although it is a big thing now. I suppose your Chau will be over by the time this reaches you and hope you have had a good time. I often think I must write to the church as I promised Mr Stanton I would but you know there is always plenty more places I want to write worse so you can tell Mr Stanton that I think of them often and will write soon. So give my best regards to all, and I close as ever with lots of love and kisses 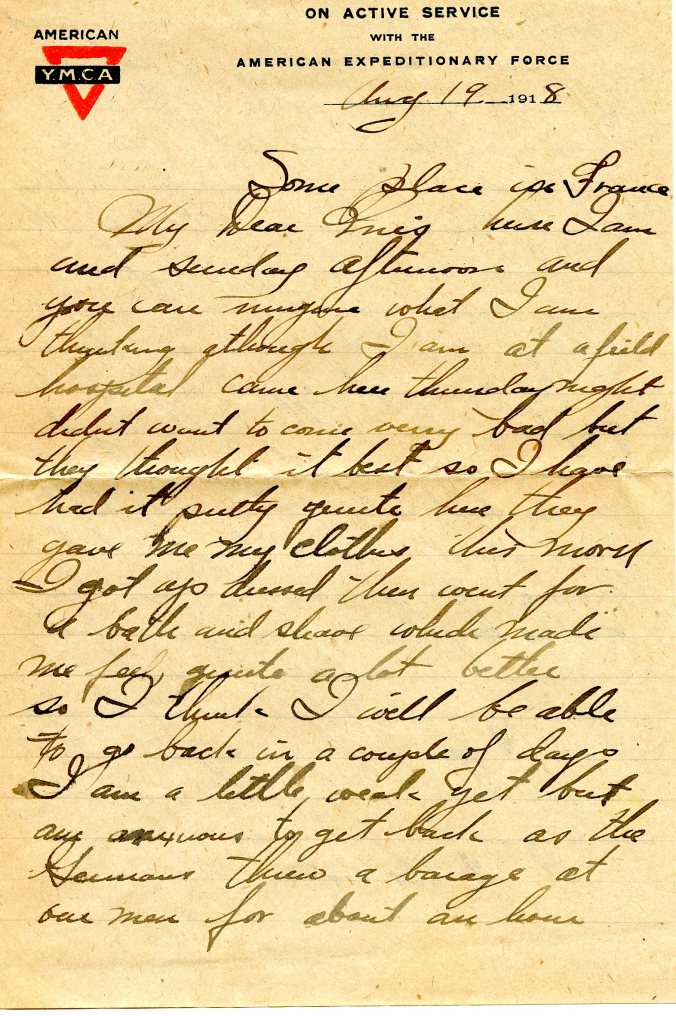 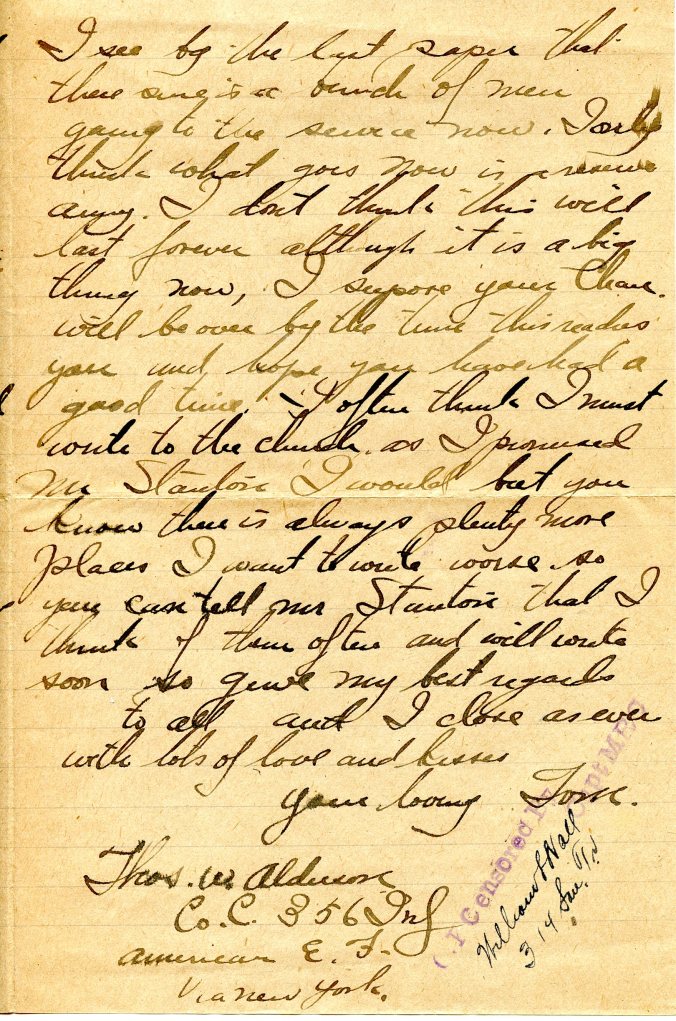