Grandpa rarely mentioned patriotism in his letters. But in the letter he wrote on August 10, after he had finally entered into battle, he wrote, “I tell you we have by far the greatest Men and Nation on Earth.”

This framed print, about 7″ x 13″, has a copyright date of 1942. I don’t remember it, by Mother tells me it hung in my grandparents’ home in Effingham, Kansas, in the hall between their kitchen and dining room.

His letters from the front (and I have nine) don’t mention place names. Certainly, the Allies were active along the Western Front in early August. The National WW1 Museum and Memorial notes on their blog that “The Hundred Days Offensive,” beginning on August 8, saw the British near Amiens and the Americans further south, around St. Mihiel. These 100 days would mark the final chapter of the war. American soldiers played a central role in the victory celebrated with the Armistice on November 11. Unlike the demoralized and exhausted British and French troops, and the equally dispirited Germans, the American soldiers were rested and ready for battle.

In Grandpa’s “My Soldier’s Record,” a booklet describing his service, he names the Toul Sector as the place he was “first under fire.” This lines up with the account detailed in History of the 89th Division, p. 55. “On August 3 and 4, 1918, the 89th Division loaded itself into trucks and started for a front line sector north of Toul.” Their mission was to seize part of the salient (or “bulge” into French territory) held by the Germans. Noteworthy, according to the History, was how this was “the first American division ever permitted to enter the line as a unit and without having been previously brigaded with French or British troops.” (p. 56) It also established a routine, with a third of the troops on the front line, another third behind to provide support (and food prepared by cooks like Grandpa) and the final group well back in reserve, “resting, refitting and training,” according to History, p. 76.

The mission in the Toul Sector successfully ended on August 10, the date of Grandpa’s letter. Here is that letter, his first from the front, transcribed. I’ve changed the punctuation to help with reading, but kept his spelling. Below it is a scan of the letter. A couple of notes: Grandpa refers to an enclosed note “written some days ago,” which I don’t have. Marshall is his younger brother. He mentions the headquarters, which History names as Raulecourt (halfway between Toul and St. Mihiel), p. 58. The Chronicle he received is the King City, Missouri newspaper.  He calls the night the “busy time,” because the Germans often attacked during the night and early morning hours. Through it all, there was time for doughnuts, as you’ll see!

Some place in France

I have now an opportunity to write you as I have not for the last two weeks, although I am sending one tonight also that I written some days ago. We have made some move since I written you last and you can guess where we were are at, but all is well, but things are real exciting at times. I got ten letters yesterday most of them were from my true loved one, two from Mother also one from Marshall stating he had moved to Denver. The latest from you was written July the eleventh. I sure think you a dear one to write me so often and only wish I could return as many, but I am thinking of you just the same.

I am sure seeing some great experience and wish I was able to tell you all but you know there is a day and days where I won’t have to write can only talk to you, and you know I am good at that. Ha Ha. When you write me tell me anything you wish as the incoming mail is not censored at all.

The Y.M.C.A. men are on the job here also the Salvation Army. They are right in the trenches doing their bit and and bringing stuff to the boys. I tell you we have by far the greatest Men and Nation on Earth and as our Slogan goes Hell Heaven or Hoboken by Xmas is being carried through daily.

Mother writes real cheerfull and it is as you said in one letter, makes it a whole lot better for me to do my bit as I have always done. Head Quarters Co. is real close to us. The band plays every night and I tell you it sure sounds fine. I am in the cook shack now also Key Ring and Barcuss is here writing. We have our work done for today. I got a couple of copies of the Chronicle a few days ago, the first second class mail since we got here. Well my dear it is now time for me to go to bed so I will close as usual with lots of love & kisses,

Another day is here and a nice one and I am enjoying the same. I am at the Y.M.C.A. hut now. Quite a few of the boys are writing. Things are quite today but of course we cant tell about tonight as that is the busy time. I am sure enjoying my experience. Clyde Black was at our kitchen to see me a few minutes this morn. He is looking good. We had a good dinner today. I rolled out over five hundred doughnuts while the other boys ran them. We are drawing lots to eat. Well my dear I will close again having in mind this is Sunday afternoon and I will have to send more than usual amount of love & kisses, 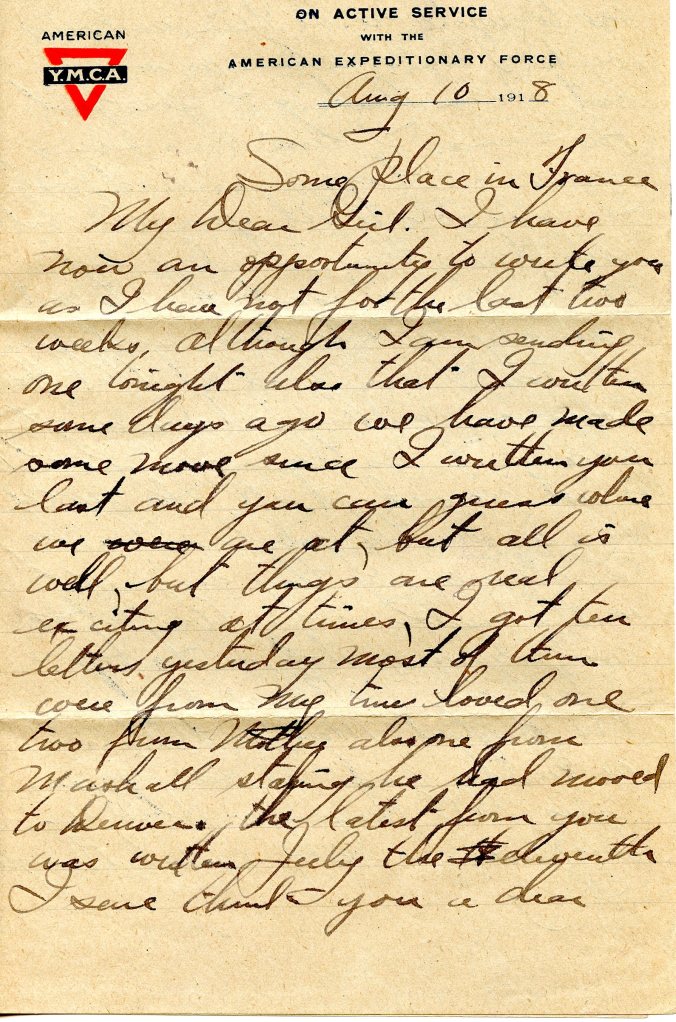 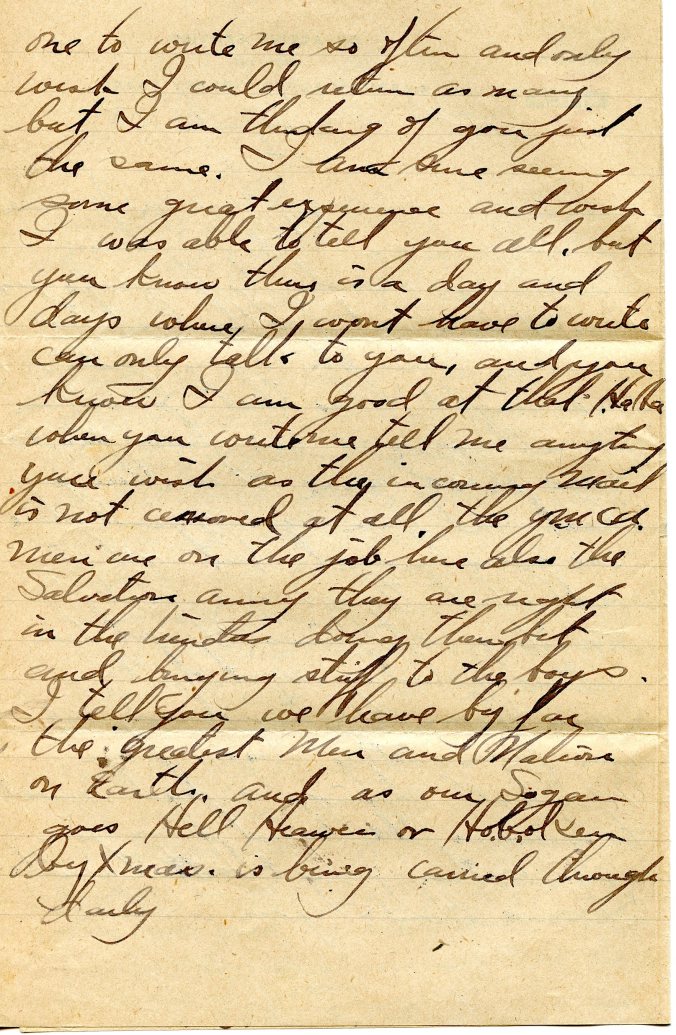 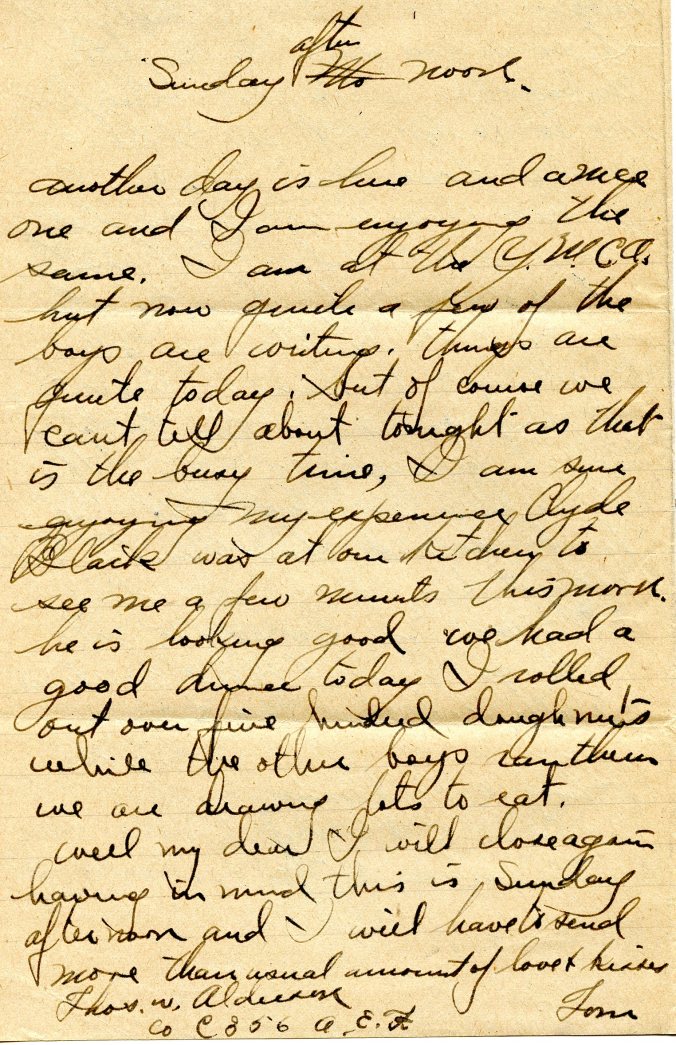 One thought on “The Greatest Men and Nation on Earth”