“Today was Mother’s day,” Grandpa wrote on May 12, 1918, “and we got the word that Gen. Pershing said for every boy in American army to write to his mother. I told the boys that I didn’t need much of such a suggestion as I hardly ever miss, and you as well.”

It’s true. Every day, almost without fail, Grandpa wrote to his mother and his “dear girl.”

Grandpa’s mother, a woman we knew as Grandma Bean. This undated family photo was taken along a country road near King City or Stanberry, Missouri, probably around 1950.

I don’t have any memories of Grandpa’s mother, only that she had the name “Grandma Bean.” We tend to call all relatives who achieve grandparent status—regardless of the generations of separation—as Grandparent + last name. Bean was the name of her second husband.

Her given name was Viola Filer. She married her first husband, William Alderson, in 1888. She was 19, and he 41. They had three children–Ethel, Grandpa, and Marshall. She was widowed in 1930, and, in 1940, married Charley Bean, a farmer.

Recently, I asked my mother about Grandma Bean. She remembered that Grandpa helped build a small house for her on the north side of the park in King City.  “And I think she did laundry for others to make money to live on.  She often befriended Mary Jean if she needed something during her high school years, or so I understood.” Mary Jean was my father’s cousin.

I asked my sister, four years older, if she remembered Grandma Bean. No, not really, or perhaps: did she live in Stanberry? Mother answered that question. “We did visit her and Charley Bean at their small trailer home on a farm north of King City, and I think at a care home in Stanberry,” a little town nearby.

Grandpa’s family lived simply on farms in northwest Missouri. They were active in the Christian Church. Like many families in their communities, they willingly sent their sons to fight in World War 1. But they did so at a cost, losing young men who tended the fields and cared for the animals, which brought in critical family income. On Mother’s Day, the Army encouraged everyone to honor the sacrifice of the mothers, for whom this war was being fought, or so they argued . . . 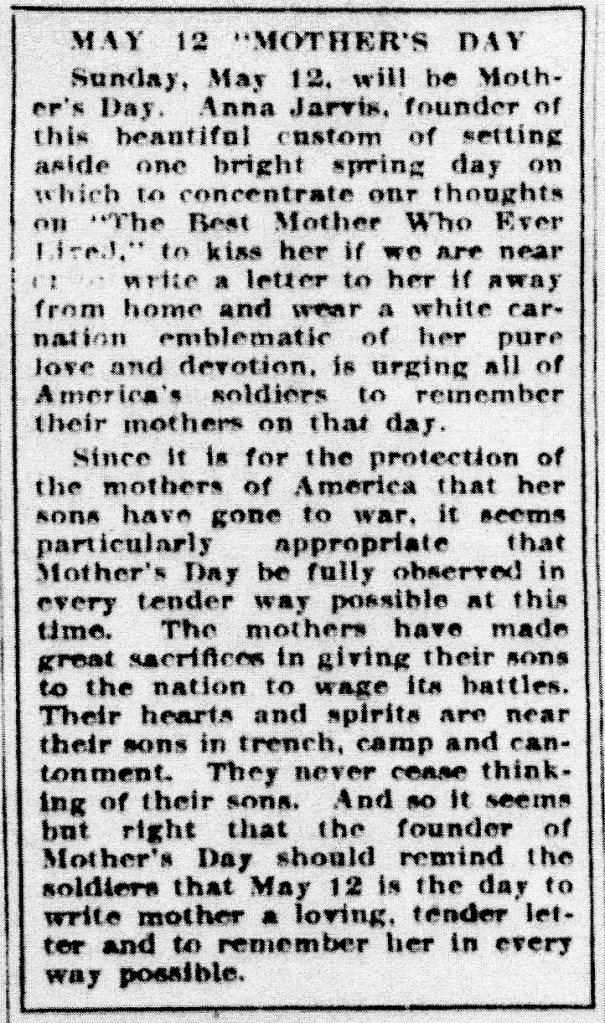 Trench and Camp, May 4, 1918, with permission of the Kansas State Historical Society, Copy and Reuse Restrictions Apply.

When Grandma Bean died in 1958, I was only five. My mother recalled the funeral. “That may have been the first funeral that you attended.  It upset you to see your grandfather grieving.  But you were too young to understand.”

The obituary for Mrs. Viola Alderson Bean ran in the local paper, Tri-County News. They described her as a “devoted wife and mother and person of great industry, always busy when her health permitted.”

Worth remembering, on Mother’s Day in 1918, and today.