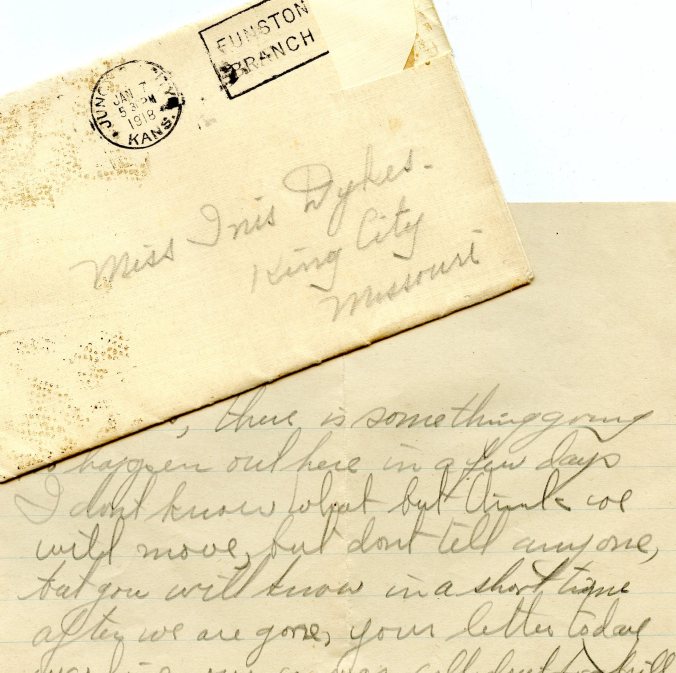 This letter, from January, captures the pervasive fear that settled over Camp Funston during the winter and spring months of 1918. Just when would the troops be sent overseas? And, what would happen–to Grandpa, his family and his dear girl, “after we are gone?”

The specifics of deployment were kept under wraps, understandably. But the unknowns of time and destination and assignments fueled rumors and contradictory information.

A French officer said in his speech at the Auditorium a few nights the war would last not longer than four more months.

Only a few days earlier, Grandpa had been asked if was ready to go.

The captain ask me today if I wanted to go to France. I told him I wanted to when Co. C went, but did not want to be transferred from this co.

What wasn’t said was clearly seen. In February, he described the departure of a large group, ending with a common refrain, “they say” . . . 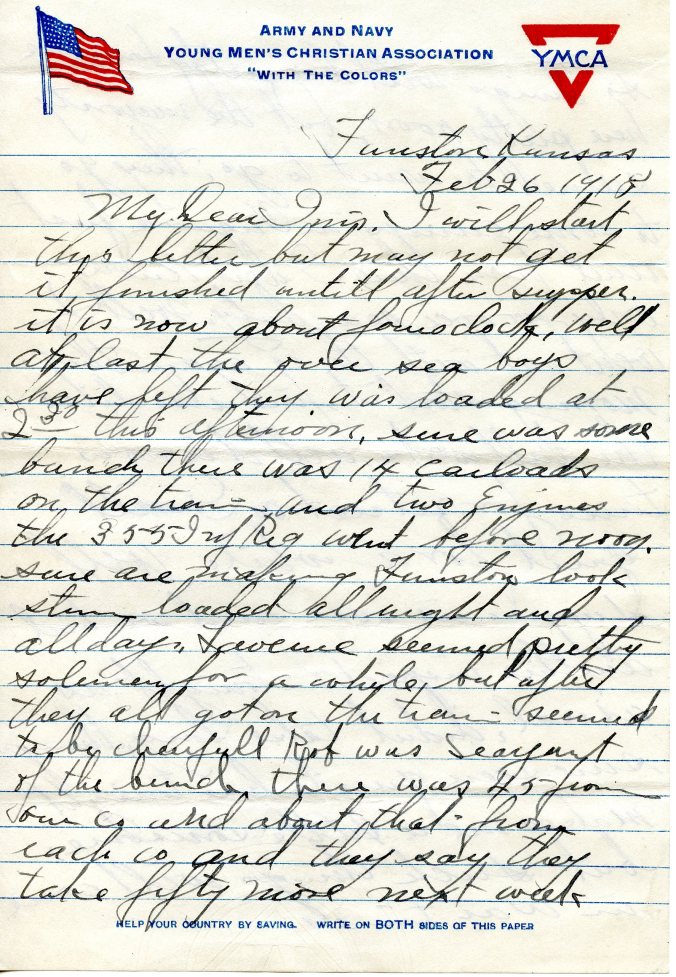 Over the months, troops left, new recruits arrived, speakers filled auditoriums as they offered upbeat reports, or grim predictions about a war that might drag on for years. Training continued. But so did another part of camp life: leisure activities. In January, Camp Funston opened what they called an amusement zone, soon known as the “Zone.” 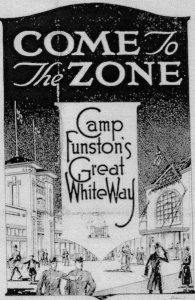 Grandpa could walk a few blocks from his barracks to the Zone, which stretched nearly a quarter of a mile and offered a theater, movie house, pool hall, cafes, stores, banks, and wide sidewalks to amble along.

Trench and Camp reported that the architecture followed the “usual World’s fair style” and mimicked Broadway’s “Great White Way,” so named for the street lights that cast a white light in the evening. It was privately funded and, according to Trench and Camp, the Zone was “the only city ever built within an army camp.” (January 26 and March 30, 1918, issues)

There were other activities at camp, presumably to keep up morale and distract the soldiers from their mounting anxiety of what would happen “after we are gone.” Grandpa reported on a well-attended musical performance by the Shriners from Kansas City’s Ararat Temple on May 5. Their 50-piece band and 50-member chorus belted out patriotic and popular songs, concluding with George M. Cohan’s Over There, “Send the word, send the word over there, that the Yanks are coming,”

That was the goal, sending American soldiers over to win the war. But many of the soldiers Grandpa knew, dreaded the assignment.

Some of the boys, in fact most every one here, says they would take a discharge on anything. I tell them I don’t want to quit until it is over because I am no slacker. But every one knows that, don’t they, and I also tell the boys and the world when I come home I want to come home with honor. 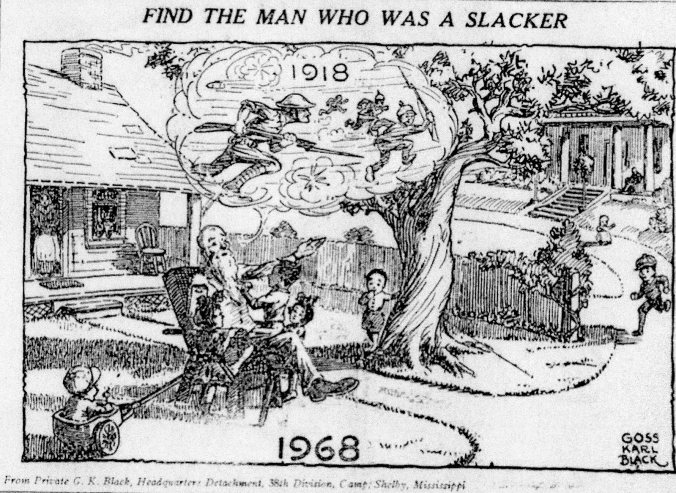 Among his contemporaries, “slacker” referred to a man unwilling to serve. Where is the slacker? Look for a lonely man on his front porch. That’s not the man Grandpa wanted to be. From Trench and Camp, September 28, 1918, with permission of the Kansas State Historical Society, Copy and Reuse Restrictions Apply.

Rumors of war and deployment and abstract notions of service and courage roared through camp like a dust storm across the Kansas prairie, exhausting the thousands of soldiers training at Funston. I think about this and how unsettling it must have been. But soon it would become real, the battles of war. And Grandpa admitted to Grandma that he was afraid. “I drempt that I was in a battle on the western front,” he wrote on April 23, “I was a little scared when I woke up.”

He was worried about his mother, too.