Late February, 1918, Grandpa wrote Grandma that he had quit the cooking job. He’d been one of four cooks for his Company “C” since mid-October. This job assignment as a cook had surprised me, when I first saw it in his letters. I’d never seen my grandfather in the kitchen, never known him to have any interest in cooking. 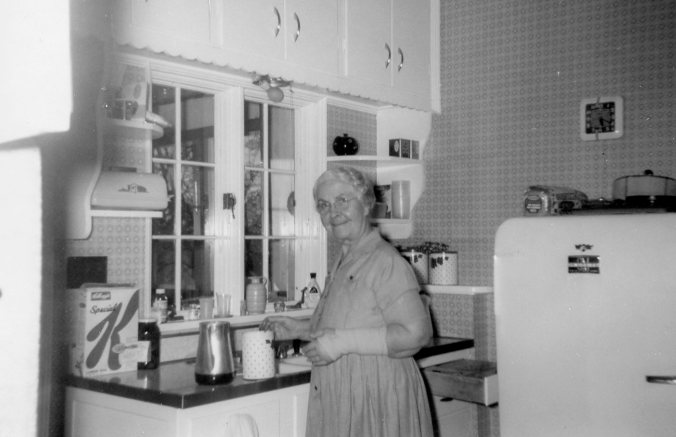 Grandma ruled the kitchen in Effingham, even with an injured wrist.

So, why was he chosen to be an Army cook? I haven’t found an answer. Maybe it was as simple as what Grandpa wrote the week after arriving at camp, “I and every one else is just like a horse, we will go just where they say.”

What happened, then, four months into the job, that led to his quitting?

I have quit the cooking job as the captain wanted me to take the barber job for all the time and I ask him quite a while ago to let me drill a while.

Seems the “quitting” was really a way of saying he was changing jobs. But which jobs? Cook and barber? For months, he had occasionally cut hair in the barracks. There were barber shops in nearby Army City, Manhattan and Junction City, but convenience and probably lower cost must have made Grandpa’s services attractive. When his captain, Captain Harris, sat down for haircuts, and a lieutenant, too, I’m guessing Grandpa had earned the kind of respect from his superiors that allowed him to freely discuss his job assignment.

Captain Harris wanted him to become the official Company “C” barber. Grandpa didn’t want that. Instead he wanted to drill, to prepare himself for combat in France.

The captain cut him a deal. He would keep Grandpa listed as Company cook, but would let him take a break from those duties to drill. He also shelved the idea of making him the official barber.

I will drill for a couple of months and go back to the kitchen, so I will have it all, Barber Cook and a Soldier.

I’ll describe the nature of those drills in coming posts. But here, I want to share what I’ve found in the letters that helps me picture my grandfather’s desire for combat training. It started when he watched the troops leave Camp Funston for overseas duty.

The war had become real. Grandpa saw the trains leaving the Union Pacific depot, “all night and all day.” (The location of the depot appears in the panoramic map of the camp, linked in the February 23 post.) He ended the letter, musing on feeling lonesome.

For weeks, Grandpa had seen troops disappear into the trains at camp. He would hear rumors on who would be going next, and where they were headed. He attended lectures with speakers who sometimes announced the war would end by summer, and others who painted a more ominous picture of the war lasting years. He found the same differing opinions in newspapers, the gist of which he shared in letters to Grandma. I sense his resolve to go, to fight, to be with his buddies hardened over the spring months. This may be why he wanted to drill.

All the while, Captain Harris checked in with my grandfather. In January he asked if he want to leave early and start his cooking assignment in France. No, Grandpa wanted to stay with his company. When Captain Harris told him that he’d keep him listed as the Company cook, Grandpa knew what this meant: a couple of months until he boarded one of those trains at the depot, a couple of months to learn how to be a combat-ready soldier.

*Sometimes Grandpa only wrote “Tuesday night” on a letter, without giving a date. I go by postmarks on envelopes to assign the date.

2 thoughts on “Changes at Camp”